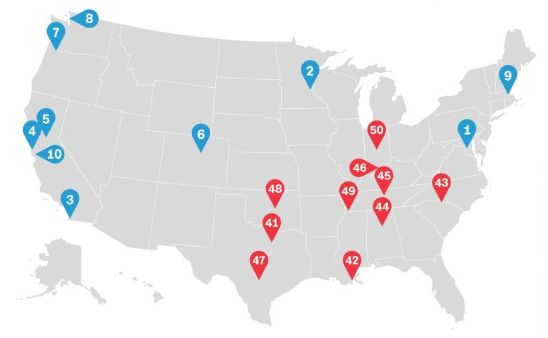 The American Fitness Index released their annual list of the 50 fittest city-metro areas in the US earlier this month. The report is a scientific snapshot of the state of health and fitness at the metropolitan level. The AFI measures the health of a metro area and helps urban leaders design infrastructure to promote active lifestyles. The study uses composite scores of metropolitan statistical areas (MSAs) to measure the health of each metro area. Access to public parks was a measure added this year.

Unfortunately 2015 didn’t look quite as good as 2014 fitness-wise. The AFI saw an 11.3 percent drop in the number of people who exercised within the last 30 days, and a 7.8 percent increase in diabetes and death rates.

As interesting as their findings are, it’s even more interesting if one takes into account the number of climbing gyms within each metro area.

According to this year’s American Fitness Index, Washington, D.C. is the fittest city in the country, holding onto its title for a second year in a row. The metro area around DC includes the heavily populated cities of Arlington and Alexandria, Virginia, as well as parts of Maryland, which have have a combined total of 4 climbing gyms. But within the District itself there are zero commercial climbing facilities which makes it an anomaly within the study. Taking into account the district’s accessible public transit system, a citizen of DC can ride the Metro Train from the Earth Treks in Rockville, Maryland in the north, all the way to Sport Rock in Alexandria in the south.

Minneapolis and Washington DC have been battling it out for fittest in the country for years. But this year Minneapolis/St. Paul lands respectably in 2nd place. Helping them do that is the Midwest gym leader, Vertical Endeavors which has two facilities in the area. Keeping the community psyched since 2011 is the Midwest Climbing Co-op which is open to members 24 hours a day. Minneapolis is also home to the US’s second dedicated climber training center, Midwest Climbing Academy, which is bring up the next generation of crushers.

So Cal is blessed with an ocean on one side and mountains on the other, which leaves little excuse to sit around under palm trees. And even though the weather is always a comfortable 72 degrees the area abounds in climbing gyms. Mesa Rim operates the largest of the gyms and is opening a second facility close to downtown later this year, while Vertical Hold and Solid Rock have been holding it down in San Diego for 22 years. Boulderers have 3 bouldering-only facilities to choose from: Grotto, The Wall and Vital. San Diego jumped up from 8th place on the Fitness list from 2014.

San Fran seems to show up on all the lists these days and right now it’s the epicenter of all things hip and young. The Touchstone gyms like Mission Cliffs and Berkeley Ironworks bring the sport of climbing to the urban masses and have even more reach with their new and very popular Dogpatch Bouldering facility which has become the place to be seen. Meanwhile in other parts of town, Planet Granite keeps the people healthy with their extensive fitness areas.

Sac-Town metro is one of the smaller study areas and it shows in the number of climbing facilities. In addition to all the rock in the nearby Sierras and Yosemite, Sacramento area climbers have three gyms to choose from with Touchstone’s Pipeworks being the largest and closest-in. UC Davis students get to keep up with their training by visiting the 22 year old Rocknasium Climbing gym. This metro area bumped up 5 spots from 2014. 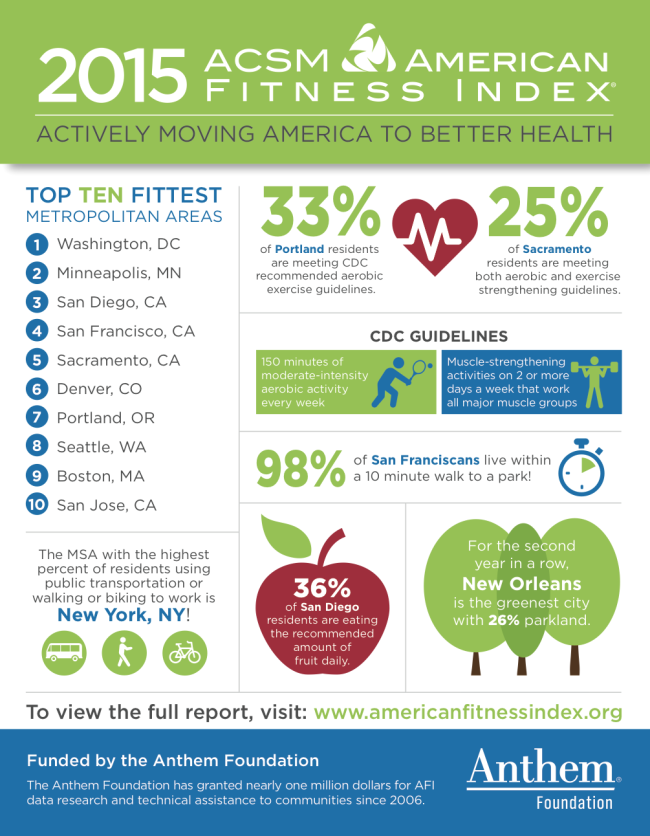 Denver should come as no surprise as one of the fittest areas of the country. With easy access to the Rocky Mountains and boasting a strong fitness culture, gyms like Rock’n Jam’n and Thrillseekers have been working hard to grow the climbing community for years. And now Movement, Earth Treks and the Denver Bouldering Club have stepped onto the scene.

Portland dropped 5 places to land at #7. With predictably rainy weather it’s a little surprising that Portland made the list. But that same weather makes for some good gym climbing. The Portland Rock Gym and Stoneworks have been keeping Portlandia pumped for decades. And the bouldering craze really caught on right here with the advent of the Circuit Bouldering Gym. Now the new era takes off with the opening of Planet Granite and The Source which brings climbing to the urban cores of PDX and its northern neighbor Vancouver, Washington.

With clean white granite close-in near the Cascades and plenty of climbing gyms, Seattle is truly a climber’s town. Where it’s possible to ski, climb and surf all in one day it’s no wonder Seattleites are among the fittest. It’s also where Vertical World and Stone Gardens have been growing and keeping the climbing community healthy since the late ‘80’s. And now the upstart, Seattle Bouldering Project brings new energy into the Sound.

At the end of 2015 there will be 10 commercial climbing facilities in the Boston metro-area which is by far the most of any metro on the Fitness list. All those gyms are helping to boost the health and fitness of the population. Bostonians are also notoriously competitive and the area’s climbing gyms keep that form by putting on more comps than any area of the US.

South of Silicon Valley sits San Jose with only two commercial climbing gyms in the metro area; one owned by Touchstone and the other by Planet Granite. Some estimate that PG Sunnyvale is the busiest climbing gym in the country, and no wonder since the millions of young tech professionals have so few other climbing options. This area could see a bump on the Fitness list if more climbing gyms moved into town. 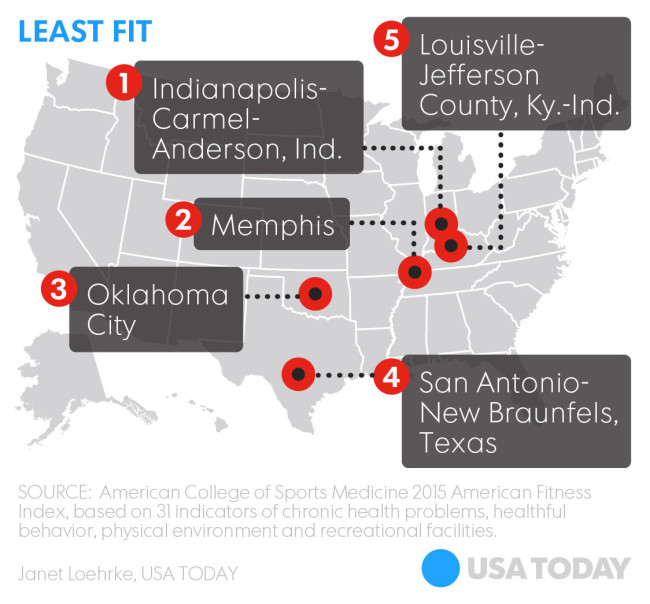 See the full report for a complete list of the top 50 fittest cities, or view the methodology for details on how the rankings were performed. 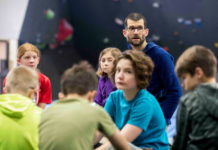 Lessons Learned from the COVID Crisis (Vol 2): We Are Better Together 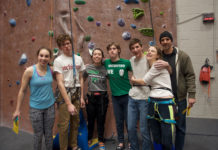 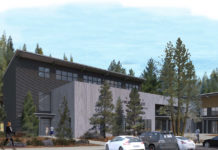 Universities are not the only schools where climbi

Like most gyms around the country, On The Rocks te

Open Doors: Fall Round Up

Do You Know CBJ?