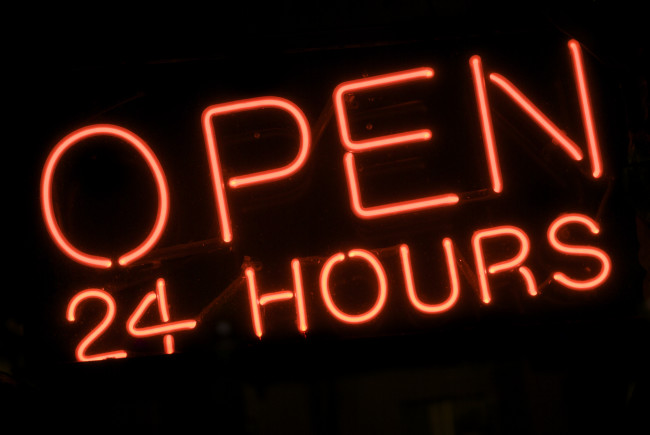 The emergence of 24-hour-access bouldering facilities has followed the pattern of the Field of Dreams: if you build it, they will climb. From the for-profit to the co-op models, 24-hour gyms have found early success and have discovered that more people want to climb at odd hours than they ever would have guessed. There are many climbers that are in school or work non-standard hours, contributing to a sizable demographic of potential customers. Ultimately the data speaks for itself, as every for-profit 24-hour bouldering gym in the US has expanded to multiple locations.

24-hour operations exist as for-profit and non-profit models. The former operate like normal
gyms, but ‘after hours’ they operate with a single staffer or no staffer at all, relying on the honor system. The latter operate like a cooperative that manages its operations to best meet the needs of its members and relies on its members to self-police.

The 24-hour business model proposes some challenges. The first hurdle is getting permission to operate on a 24 hour basis. Many townships and cities restrict licenses for 24-hour businesses. If a gym occupies a leased space, it may find that the landlord does not want the liability of a 24-hour business. These foundational hurdles can stop eager converts before the numbers on this opportunity are even spreadsheeted for viability.

Another obstacle is not having standard off-hours when clients are not in the facility to do regular upkeep and maintenance, such as cleaning the facility, resetting the problems and routes, and performing repairs or updates to the facility. However, these are not insurmountable hurdles for the committed, as many other facilities have figured out how to route set and clean the restrooms during standard business hours with minimal impact on customers.

The biggest challenge is figuring out how to manage access and risk. The standard risk management controls are the same: good lighting, a multiple camera system, conscientious routesetting and protocols for injuries. In addition, 24-hour operations employ trackable, keyless access systems to monitor and limit who is using the facility after hours.

The million dollar question is how does a 24-hour facility manage the unsupervised evening hours. For many facilities, the answer is building a community of trust.

“People respond well to being given extra responsibility … giving the members the keys to the castle, so to speak, has led them to have a lot of respect for the gym and treat it like it’s their own,” states Thomas Betterton, General Manager of the Denver Bouldering Club, which operates two 24-hour access bouldering facilities in Denver.

The clients of many 24-hour gyms don’t feel like regular customers as they are members of a larger organization and community; and this is exactly what the gym wants them to feel like. It is this overall belonging to a living, breathing community of people with a mutual interest that keeps them feeling like partners in the organization.

Luis Falero, Manager of Vital Climbing Gym in southern California, where they leave out iPads and other valuable equipment, verbalized this concept best: “When you feel like a partner, you don’t steal, because you’d be stealing from yourself.”

Given the relative novelty of providing 24-hour access to a climbing facility, it might be surprising that any insurance carriers would cover a facility that allows its members to climb unsupervised in the middle of the night. However, most insurance carriers don’t evaluate insurance applicants based on the specifics of their facility, such as the height of their climbing walls, the type of flooring used or if they are open 24-hours.

“The premiums are charged based on Total Gross Revenue, not something like total height,” said Cameron Allen of Veracity Insurance Solutions. “The facility is not the risk, the people that are coming in are the risk.”

This is why it’s essential to spend time educating clients about the facility and the sport.

SLO Op is the country’s first 501(c) nonprofit bouldering club and is a fascinating case study unto itself. According to Kristin Horowitz, co-Executive Director of SLO Op, it was originally operated on the Fight Club marketing motto, “you do not talk about Fight Club”, as it started in 2002 in a storage unit that was less than 20 x 20 feet large.

“It wasn’t a business model, but a group of kids that had a climbing space”, reminisced Horowitz. SLO Op has since grown into a 5,000 square foot facility with a second location slated to open in the late spring of 2015.

SLO Op is a product of the climbers that breathed life into it and “the rules are funny because of it,” Horowitz explained. While members receive 24-hour access, all of the open hours are staffed by one of 15 volunteers, and due to this unique structure, these hours are quirky. If you don’t find this accommodating enough, then you should assume that it’s not the right gym for you. If you do subscribe to that, then you’ll be like one of the 800 members that feels right at home and has access to their “take and bring back” crash pads and free rental shoes.

Vital Climbing Gym opened its second location in Murrieta, CA in July 2011. It is twice the size of its Carlsbad, CA location and was built with access in mind. “The gym was designed from the ground up to be a functional 24-hour facility,” said Dave Sacher, an owner of Vital. Vital was modeled after SLO Op, where Sacher climbed in college, yet is a for-profit company that operates like a normal bouldering gym during the day and offers members keycode access at night.


Vital has since opened a third location in Bellingham, WA, that has been so successful they had the enviable problem of having to raise prices to avoid over-membership.

A little over 2 years later and only 9 miles away from Vital’s Murrieta location, Rock Fitness, the
only staffed 24-hour gym climbing gym in the country, opened it’s doors. It only takes a company to pay one employee from 11pm to 5:30am to say it is staffed for 24-hours, even if that person is in the office or cleaning. Nevertheless, there is a dedicated person to answer your questions, take cash, be the coordinator for any type of injury that may occur, and be the hard-ass that you need at 2 AM if you notice another member and their buddies are climbing inebriated or just being jerky.

As more 24 hour gyms open or existing gyms allow portions of their facilities to have 24 hour access, one might ask the age old chicken or the egg question. Are they jumping on the 24/7 bandwagon or, are acute business owners identifying an opportunity that would serve a portion of their demographic that makes sense to their own business model.

In regards to Rock Fitness, the evidence points to capitalizing on opportunity and it’s the other elements of the unique model that synergistically make 24-hours right for Rock Fitness. If the late night climbing revenue doesn’t cover the single staffer, the other amenities might, the reduced need for a separate cleaning staff lowers costs, and the 24/7 freeway visibility of the bright Rock Fitness sign on the 15 between San Diego and Los Angeles has inherent marketing value.

Though the West Coast may be the hotbed of 24-hour bouldering facilities, there are a number of other incubators across the US. These cooperatives normally open in areas that do not have year round access to rock and require good indoor training spaces. In the midwest there is the Minnesota Climbing Co Op, which is set up similarly to SLO Op. Further east there are El Dojo in Massachusetts and the New Paltz Climbing Cooperative that began as grass roots initiatives meant to breed a passion for climbing, community and getting stronger.

Chad Foti, the Director of the New Paltz Climbing Cooperative, said that these gyms “are not attainable without really strong community involvement.” His advice for others is to be bold. “I would do it ten times over, but I’d get a bigger space initially. The hardest thing is that you just have to commit.”

Who really knows where the advent of the 24 hour wall took place…really it was a group of
people who didn’t have space at home, needed a serious training spot and got together with
friends to make it happen. Now it has been legitimized and exists in multiple forms to
accommodate the needs of each specific community. By any frame of reference, 24-hour gyms
are good for the community and act as trickle-up generators that spur interest in the community
of climbing, thus organically growing our favorite sport.