Behind the Wrench… is an ongoing series that interviews the “rock stars” of the climbing industry, the routesetters at the gyms. This time CBJ ventures to The Front Climbing Club, one of the most legendary gyms in the U.S., to talk behind the wrench with Eddie Morillas, the Director of Routesetting, about how the pandemic is impacting routesetting, whether a postponed national championship might still take place, and what exactly separates good and bad routes.

CBJ: Let’s start with the pandemic because The Front was in a unique situation; a new facility was scheduled to open, and USA Climbing’s Sport & Speed Nats were scheduled to take place there. Can you walk me through the timeline for The Front?

Morillas: ​It was a unique situation, indeed. This was mid-March so the situation seemed to be changing by the hour, but up until about three days from the [USA Climbing] event we were feeling confident that we could host it safely with some modification. The Sport and Speed routesetting crew had been working all week and had set almost the entire comp, so it was a pretty brutal gut-punch when we heard the event was going to be postponed. A few days later we made the decision to close the gyms.

It was a pretty strange vibe around the gym immediately after the closure because so many of us had been redlining to put the finishing touches on the facility—then suddenly everything stalled and we were staring down an indefinite shutdown. Thankfully, the owner [Dustin Buckthal] was adamant about keeping everyone employed and our community really stepped up, which allowed us to get the gym set and ready to open—as well as tackle some big renovation projects at the other facilities. We were fortunate that COVID case counts remained fairly low in Salt Lake, but even so, we were completely closed for two months. Starting mid-May, we began a phased reopening and on June 15th we finally reopened completely to guests and new members (with strict distancing and hygiene guidelines in place, of course).

We’re still working closely with USA Climbing and intend to hold the event as soon as we can do so safely. The goal is to use the routes that were set in March and bring the same setting crew back out to finish the job…and watch the competition take place on the field they worked so hard to create. Unfortunately, like everything these days, when that might be is still very much up in the air.

CBJ: How were you personally impacted by the first pandemic wave?

Morillas: ​Since climbing areas are such a shared resource, it seemed best to steer clear of the crags, which was definitely a bummer because spring climbing season in Utah this year was pretty prime. But it allowed me to spend some time on the other activities I enjoy. I was able to catch the tail end of the backcountry ski season, and then I hopped on the mountain bike.

Once the new facility was all ready to go, we jumped on a big renovation project on the walls in our original bouldering gym. After 20-some years of use the walls were looking pretty beat up, so we went through—with the help of Vertical Solutions—and threw up a fresh layer of birch and some beautiful hardwood to liven the place up. Of course, the angles in that gym are legendary, so we didn’t make any changes to the actual climbing terrain. There were definitely some long, dusty days; but our crew really stepped up and the end result is amazing.

CBJ: Are you originally from the Salt Lake City area?

Morillas: ​I’m originally from Southern California. I grew up in a small city called Agoura Hills that’s 40 or so miles north of Los Angeles. I discovered climbing in 2010 when one of my buddies took me to the local gym and I pretty much immediately started working there so I could have a free membership. Maybe a year or so after that I was given the opportunity to try routesetting and I’ve been doing that ever since.

​In 2012, I moved to Santa Cruz to go to college. During that time, I started climbing a ton around Tahoe and the Eastern Sierra. When I finished school in 2014, I packed up the truck with the intention of doing the dirtbag thing for as long as I could before I had to go back to work. ​When the time came, I decided the cost of living in California just wasn’t worth it to me any more, so I started looking at new places with lots of rock, an established gym culture, and easy access to the mountains. Salt Lake fit the bill and I honestly don’t think I’ll ever leave. I’ve been setting at The Front since I moved to Salt Lake in 2014 and took over the Director of Routesetting role in September of last year.

CBJ: Is there anyone in the industry—routesetter or otherwise—who you consider to be a mentor?

​Morillas: He’ll probably give me a hard time for saying this, but Mike Bockino is definitely the person who has had the most influence on my progression as a routesetter and my routesetting career overall. He was the Front’s Director of Routesetting for many years before starting Level Climbing, and he was the one who initially gave me the opportunity to come work at the gym. He introduced me to competition setting and encouraged and enabled me to take the steps to advance through USA Climbing’s setting program.

Working with him over the years, I definitely picked up the work ethic that’s required to be a successful competition setter, as well as the ability to check my ego at the door and cater the product to the end user and not the routesetter. Perhaps most valuable of all, I picked up the subtle art of friendly trash talking and probably built up some thicker skin because of him.

CBJ: There’s a lot of routesetting history in the Salt Lake City area. I suppose we could go way back and reference the first Snowbird comp that took place in 1988, but then there were also the legendary Professional Climbers Association [PCA] comps at The Front in the early 2000s. Is there an awareness among the setting community there that they are working in a region with so much heritage?

Morillas: For sure. That history of competition setting and climbing is definitely a big part of the Front’s culture and we try to do what we can to continue to provide a venue for youth and adult athletes to develop through competition—as well as introduce new members of the community to that aspect of the sport. Whenever we host comps we like to make sure there’s at least one “PCA style” finals boulder, and I think we might have the largest collection of old-school resin Bosses in the world. I think it’s worth throwing the Di’namik comp series in there too because if the measure of a successful Front comp is the volume of the crowd and the size of the party, then those were some of the best!

CBJ: The flipside to history would be the future. How do you see the craft and career of routesetting evolving in the future?

Morillas: That’s a great question. On the commercial side of things, I think there’s a lot of potential with some of the apps that are being developed currently to bridge the gap in communication between gym members and the routesetters. If we can tighten up that feedback loop, we’ll be able to be really deliberate in catering the product to what all members want, not just the most vocal ones.

I’m really excited to see how the Olympics (whenever it can happen again) affects the future of competition setting. It seems like countries are beginning to invest more heavily in building their national teams, and as the level of the competitors increases, I think we’ll start seeing some super exciting rounds of competition.

As far as routesetting as a career goes, I think that as the industry continues to grow up and we become more professional, you’ll start seeing more and more gyms transition to a two-rope system the same way they switched from using Grigris to Rigs. Routesetter safety will really become a priority as more and more people with less experience begin to work at height.

CBJ: Can you tell me a little bit about your own setting style, and what you think are some factors that separate good routes from bad routes?

Morillas: I think, like most setters, my style is pretty heavily influenced by the style of climbing that I like and am good at outside. Having spent the early part of my climbing career in the Sierra Nevada, I really love climbing on granite. To me, it feels like granite usually rewards the good climber, not necessarily the strong climber, and I like when boulders inside create that same dynamic. I enjoy setting climbs that test climbers’ balance, flexibility, and footwork rather than simply their brute strength. Presenting these skills to climbers in the gym also creates a good foundation that puts them a step ahead when and if they decide to make the transition to climbing outside…especially given the nature of most of the local climbing around Salt Lake.

As time goes on, I try to remove my own opinions about routes from the feedback I give to my setters. I think it’s more important to learn what the specific community you’re setting for likes and dislikes and what they’re looking to get out of a gym session. At The Front, most people use the gym as a tool to train for outdoor objectives, so we set a higher proportion of rock climbing-style climbs than competition-style climbs. Our community tends to think climbs are bad when they have very defined cruxes (especially near the top of the bouldering wall), unnecessarily uncomfortable holds or grip positions, and size inequity.

I will say the one biggest thing that will ruin a climb for me personally is constantly having to match feet.

CBJ: Does the pandemic change routesetting at all?

Morillas: You know, for us, so far it really hasn’t changed much. We’re aware of maintaining distance, we wear masks (except during forerunning), and we make sure to keep a bottle of sanitizer close all the time. But other than that, our process is pretty much the same as it has always been. We tossed around the idea of using the routesetting to try to space people out, but we decided to go a different direction to control for that. Many aspects of the gym experience have changed due to the pandemic, so we really wanted the experience on the wall to be familiar and something that people are comfortable with.

Are you leading a climbing gym or brand through this unprecedented period? Or, do you work in the industry and have a story that others could benefit from hearing? If so, please contact us and tell us about it. 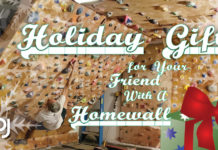 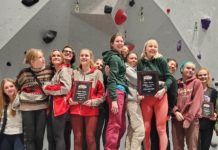