The family that owns and operates Allez Up will soon open a bouldering gym and cafe, called Seven Bays Bouldering, in the up and coming North End neighborhood of Halifax, Nova Scotia. The 6,000 square foot facility will feature a 120-foot long, 14-foot high bouldering wall carefully designed for the compact space by Canadian climbing wall manufacturer B121.

Allez Up, which opened their doors in 2012 and operates one gym in Montreal, Quebec, is teaming up with local climbing enthusiast Hana Ogasawara, who also had ambitions to open her own gym in the North End. “That really spawned the project, knowing that we had the connection with someone who could be here full time,” said Jean-Marc de la Plante, whose family owns Allez Up and Seven Bays Bouldering.

After the opening of Allez Up, “We felt like we kind of had the wind in our sails and we wanted to do something else,” de la Plante told TheCoast.ca. After doing some market research the de la Plante’s decided Halifax needed an accessible spot to climb and have a drink, in the heart of the city. “There is really good outdoor bouldering here, there’s a strong community but a lack of urban facilities.”

“Our business model is to build cool, funky climbing gyms in urban locations that are accessible…with public transit,” said de la Plante. “That’s why we picked the north end.” The North End, which has become popular with university students and artists is going through the much maligned and praised gentrification process happening in similar urban neighborhoods.

De la Plante said Seven Bays is modeled after smaller urban climbing gyms, like those found in Japan, that have a particular emphasis on routesetting.

De La Plante is relying on his Head Routesetter and international setter, Tonde Katiyo (formally of Seattle Bouldering Project), who has extensive experience with Japanese-style gyms, to oversee the technical aspects of route schedules and grading, and to train a local team to do the actual setting.

“A lot of people around the world open gyms and don’t have a route-setting philosophy, which is weird, because routesetting is the product,” de la Plante told TalkHalifax.com. “It’s like the food in the grocery store, that’s why people come to the gym.”

Seven Bays will be more than just a place to climb. Taking a hint from his Montreal customers’ requests, de la Plante says that the new space will also house a cafe that will serve coffee, snacks and beer.

“We’re calling it a working cafe, so the idea is we’re not going to pressure anyone to buy something every hour,” de la Plante told TalkHalifax.com. “We’re just going to have big tables, so students, people who work on their own schedules, they’ll pick up on the climbing culture as well.”

According to their Facebook page, their hope is “that Seven Bays will become a hub for climbers to meet and exchange, or just a great place to do homework, “work” work, or just read a book, or better yet a guidebook!”

De la Plante is aiming to make the space suitable for athletes that climb at a very high level, while keeping an atmosphere relaxed and not too intense. “So everyone is welcome,” he said. “It’s not just about the hard-core climbers.” 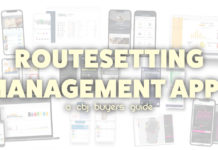