The Glendale Heights location marks the fifth VE climbing facility, all located in Minnesota and Illinois. Nate Postma, Owner of Nicros Climbing Walls, the parent company of Vertical Endeavors has put $4 million into this most recent Chicago-land project.

As a requirement of their lease, VE could not raise the roof of their building and had to work with the existing 31.5’ tall ceilings. When Postma went to his design team with the project he said “Look guys, we only have 30’ of height so we got to knock this out of the park…and we did,” he told CBJ.

Postma is not worried about a perceived market disadvantage to having 30’ walls. “Why is every body hung up on the size?” he said. “I’ve got a gym [in Minnesota] that is 60’ tall and just across town I have one that is 26’ tall, and the 26’ gym does just fine.” He feels the real question is whether or not the customer has a great experience. “In the end, what is it like to move on the walls? Was it fun, were the routes well set, was the place cheerful, does it have ambient light, is it clean?” he said.

Designing for All Types of Climbers

VE’s philosophy for building a modern climbing gym is more about the design of the facility than about how tall the walls are. With 36,650 square feet to work with they were able to dream big. “I’ve never had the space to design a gym the way I want to, until this one,” Postma said. “This one has given me the flexibility to put it all there.”

Part of this dream was creating dedicated spaces for different user groups. The idea of different areas for different types of users is not a new one, but has perhaps never been taken to the level that this VE facility has taken it.

The bouldering area is broken, literarily, into two levels. The lower level of bouldering is 100’ long and is designed with steep walls that are intended for advanced climbers. These boulders top out on the next level which is also 100’ and is intended strictly for beginners, with no grades above v3. “So the training guys don’t have to deal with the rookies underfoot and the rookies don’t have to be intimidated by the training guys,” Postma explained.

The new facility has also made dedicated space for the trad climber. Many climbing gyms have the token crack, but Postma has taken indoor cracks to the next level. He paid for two experienced crack climbers to visit Devils Tower in Wyoming and bring back exact measurements for a few of the most famous lines. “They took GoPros and tape measures, videos, pictures, and notes,” Postma said. “They did four classic routes on Devils Tower and brought that [information] back and they’re duplicating these as best they can.” With these lines and a replica of the a classic 20’ horizontal roof crack in Yosemite, Separate Reality, VE created a stand alone crack tower that will keep trad climbers happy.

“When you have the room to put cracks in, the people who like them really appreciate them. And they only appreciate them when the carving of the crack has been done very well,” Postma said.

VE has also dedicated 10,000 sq. ft. for personal and team training, and another 10k for group events like birthday parties and boy scout troops.

In a project this big there is bound to be challenges. One of the issues VE identified was supervising climbers in such a large facility. They decided to address this issue by installing more than 90 video cameras that will capture every climbing wall, some from multiple angles. They will also have a dedicated staff member during each shift whose sole job is floor supervision, like a life guard at a pool, and employees will have walkie talkies to stay in touch with other employees throughout the gym.

Another challenge VE faced is one many gym developers are familiar with: fire sprinklers. In most areas fire code requires sprinkler heads to be installed in the climbing walls where the walls are steeply overhung. This poses an aesthetic as well as a functional challenge. “Climbers hit [the sprinkler heads], kick them and pop the little crystal thing off … ours is a wet system so the instant you pop the crystal there’s water everywhere,” Postma said.

So Postma’s team paid $5,000 to an engineering firm that is recognized by the state of Illinois as fire control experts. After analyzing the space they determined that the facility had very little fire risk. “There wasn’t enough combustibles or flame sources in the facility,” Postma said. “And the fact that it’s a warehouse [means that] we have sprinkler heads every 10 feet and exits on each of the 4 corners.”

Postma took these finding to the fire marshal and was granted an exception to allow steep walls to be free of all sprinkler heads.

The Vertical Endeavors team is far from finished with Chicago. They are actively pursuing other properties in the city, and Postma says he hopes to have five to ten gyms in Chicago-land. With all this expansion you might think VE is eyeing other cities in the region, but Postma says they have ruled out most other towns because they don’t provide sufficient expansion opportunity. “You got to find a market that is big enough for two gyms,” he explained.

When asked about attaining the title of biggest gym in the country, Postma shrugged it off. “Oh, I don’t care about that, I just want to be the most successful,” he said. “The thing about being the biggest is you’re only the biggest once. Someone else will come along and build a bigger one.”

Note: This article has been edited to reflect a change in the square footage of climbing surface from 44,000 sqf to 45,000 SF. Also the facility opened on Aug. 1st not Aug 16th.

Futurist: Climb Iowa’s Key to Adding a Gym with Confidence 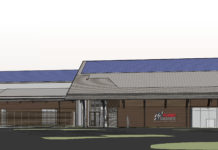 Dallas-Fort Worth to Get Its Second Planet Granite 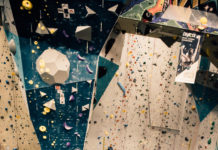 Helping People Do What They Were Born to Do: Behind the Desk at CityROCK