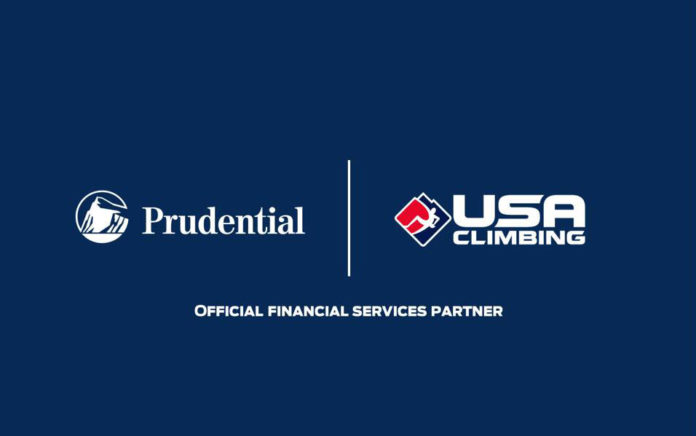 Although specific details of the partnership were not provided, the announcement did note that “Prudential’s sponsorship is aimed at building talent, supporting training and travel for international competitions, and elevating the team’s presence and success globally.” Another identified purpose of the partnership is to “shape the next generation of athletes and fans by getting more people of all ages and abilities into climbing, as well as introduce the sport to diverse communities.”

“Our partnership with Prudential is a milestone for us as it takes USA Climbing and our athletes to new heights and diverse audiences well beyond our sport,” said Marc Norman, CEO of USAC. “There is so much synergy between climbing and what Prudential stands for: both emphasize agility, speed, and teamwork for peak performance.”

USAC has partnered with other non-endemic entities in the past, in addition to its climbing industry partners. Last year, for instance, USAC named YETI―maker of insulated coolers, tumblers, and other beverageware―its Official Sustainability Partner. But Prudential is likely the largest company to ever become a USAC partner, and the official announcement comes only one week after climbing’s Olympic debut. Four American athletes competed in those Games, including Nathaniel Coleman who won a silver medal.

According to an earlier press release from Prudential ahead of the event―which first indicated the company would be “sponsoring the USA Climbing team as the sport makes its debut at this year’s games”―the company has brought back its iconic Rock symbol as “a symbol of financial strength and resilience” during the pandemic. The “Who’s Your Rock?” campaign will have key activations during U.S. cultural moments like the reopening of Broadway and Macy’s Thanksgiving Day Parade.

“Bringing together the sport of climbing and Prudential’s iconic Rock represents the strength and resilience it takes to shatter boundaries,” said Susan Somersille Johnson, Prudential’s CMO. “It takes a huge amount of discipline, dynamism and daring to dream big to compete for the first time on the world’s biggest athletic stage.”

Speed Climbing and Perfect Descent on the Rise