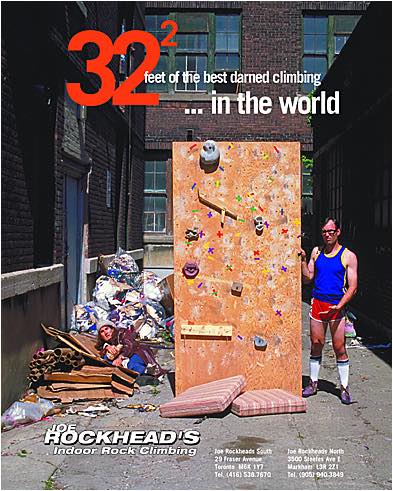 Up The Bloc announced the purchase of legendary Toronto climbing gym, Joe Rockhead in an open letter to the public.

We are pleased to announce we have been able to come to an agreement with Bob Bergman and Sharon McCrindle Bergman for us to purchase Joe Rockhead’s Climbing Gym. The deal is effective February 1st.

Luigi and a lot of the people involved at Up The Bloc all come from the Joe Rockhead’s circle so in a sense, this is the continuation of the story of Rockhead’s and the impact it has had on the Canadian climbing scene. Across the country you will find route-setters, gym owners and professional athletes who will name Joe Rockhead’s as a big influence on their careers.

This comes at an important crossroads for both Jean-Marc and Luigi, who are both celebrating 20 years in the climbing industry. And all the more so for Luigi, who was hired part time at Joe Rockhead’s back in 1998, a job that shaped his career as he went on to start Friction handholds and Tour de Bloc Competition circuit, with the blessing and support of Bob and Sharon. So this purchase brings Luigi right back to his roots… and his routes…

“I’m excited about the opportunity to continue the Rockhead’s legacy and carry it into the next generation. It’s the community that I grew up in, and I know so many people who’s lives, like mine, have been influenced by this place. I’m looking forward to seeing friendly faces, old and new.”

For Jean-Marc de la Plante, this is his 5th facility in Canada and adds to the list: Allez Up Montreal, Seven Bays Halifax, Up The Bloc in Mississauga and BoulderHouse in Victoria.

“I’ve always been a big fan of Joe Rockhead’s even if I had never climbed there until later on. I loved the iconic self-deprecating ads, that to me showed so much confidence in what they were doing and was exactly the type of humor and spirit that I loved about the climbing industry and that you don’t see anymore.

As an owner at Allez Up in Montreal, Rockhead’s influence on the industry was felt in two ways. The first was their competitive team in the mid-2000’s. In those days just having a team and uniforms was intimidating enough, but the team was stacked and dominated the podiums. Their presence on the Tour de Bloc circuit greatly influenced how we prepared and route-set for events at Allez UP, and forced us to up our game. The second was when we hired one of their long time setters Tammer El-Sheikh when he moved to montreal for school. His influence on the setting of routes was instrumental in refining the Allez UP product, and delivering the Rockhead’s style of routes which I would describe as technical with a focus on precise footwork and perfect sequences.”

Our plan is to honor the Joe Rockhead’s brand and culture by breathing new investment, energy and love into the facility. The facility needs updating, but the core values need to remain.

We take control of the operations as of February 1st, and have an immediate plan to re-invigorate the gym, and some bigger renovations planned in the coming months. The gym will continue to offer top-roping, leading and bouldering.
There will be opportunities for dual memberships between Up The Bloc and Joe Rockhead’s available as of February 1st that you will be able to purchase at both locations and online.