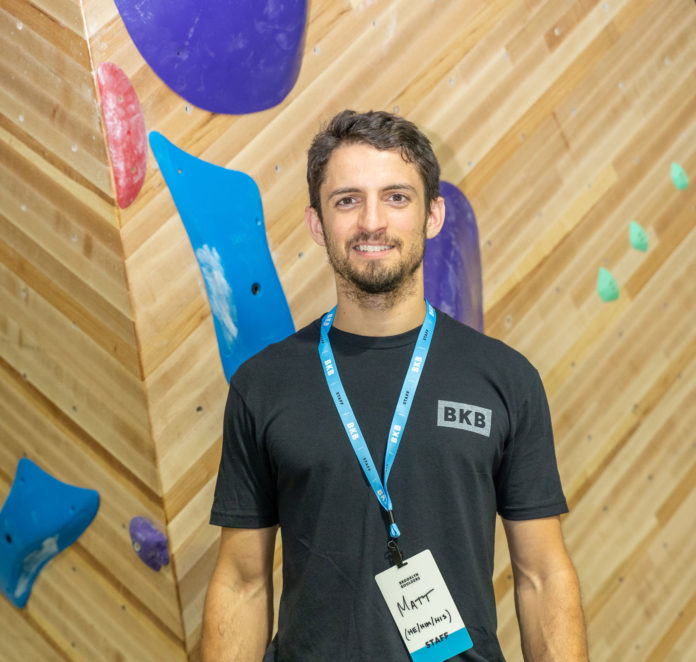 Behind the Wrench…is an ongoing series that interviews the “rock stars” of the climbing industry: the routesetters at the gyms. For this installment, we’re talking to routesetter Matt Ratajczak from the newest Brooklyn Boulders facility, BKB’s Eckington gym. Ratajczak started climbing in 2008 as cross training for pole vaulting in college. A lingering injury prompted “retirement” from track and field, and Ratajczak soon found himself climbing more and working at his college’s wall. He founded a climbing club at the school, taught himself how to routeset, and steadily worked his way up to becoming the head routesetter at a gym. Then, in 2016, he became a routesetter and coach at Stone Age in New Mexico, and eventually got the job at Brooklyn Boulders to be closer to family during the pandemic. It all amounts to an interesting story of cross-country moves in pursuit of routesetting gigs, so we wanted to hear what he learned throughout all of the twists and turns.

For more resources on getting hired as a setter, skills to learn on day one, common mistakes to avoid and other routesetting tips, be sure to read the Ask a Setter series here.

CBJ: You were mentored by another setter [Lance Hadfield] while working at Stone Age, so let’s talk about what makes a good routesetting mentor. What are some things that a routesetting mentor should do—or not do, I suppose—to best impart knowledge of the craft?

RATAJCZAK: A good routesetting mentor is honest, observant, and communicative. Upon arriving in New Mexico in 2016—after mainly setting alone for the first seven years of my career—I started receiving consistent, constructive, and honest feedback on a daily basis. Lance was incredible at pinpointing subtle inefficiencies in my processes as well as repetitive movements or styles within my climbs and pushed me to step outside of my comfort zone. Successes should be praised and failures should be redirected with guidance. Every setter has their own unique style or flavor. Let’s use salt for this example. Too much salt is unpalatable. Not enough salt is bland. A mentor should strive to train the setter to blend salt tastefully with every other spice on the rack.

To that point, how can new would-be routesetters find mentors? That doesn’t seem like something that the climbing/gym industry really promotes.

Every gym has potential mentors of varying experience levels. Currently, the crux of finding that mentor is landing a setting job with no experience. The path to becoming a routesetter varies greatly. Some people get lucky and are handed a wrench or a drill. Others start at their college wall. Some are front desk staff or coaches at a commercial gym and work their way into a part-time setting gig. Regardless of where you start or how far along the path you are as a setter, anyone you sling plastic with is someone you can learn new tricks, skills or styles from; a mentor. They might be your head setter, a coworker with years of experience, or some random setter from another state who you set a competition with. That being said, some gyms don’t or can’t invest that mentor’s time into thoroughly training new setters from the ground up. So do your research and try your best to land your first gig where the facility invests in your development as a setter.

You’re also somewhat self-taught. That seems to be getting rarer for setters nowadays, as usually a gym employs multiple routesetters. So, what was the value in teaching yourself, and would you recommend other setters take years of basically setting and forerunning alone?

Being self-taught has enabled me to communicate the craft in my own unique way. I was able to come to my own personal understanding of how movement is created and after quite some time I became proficient at teaching those concepts to others. That being said, I dealt with a lot of frustrating situations and made more mistakes in my early years alone than the typical setter probably does. I would not recommend other setters to take the same path that I did. I would have developed faster in a team setting, without a doubt.

When you’re hiring a new setter, what are some things you like to see on a resume? (Are there any red flags that make you think the person wouldn’t be good for the job?)

I like to see years of experience, as well as diversity in experiences, such as guest setting, competitions, and clinics. The only red flag that comes to mind is no setting experience. Setting on your friend’s homewall is better than nothing!

How would you like to see routesetting evolve in the next few years?

I would like the evolution of routesetting to revolve around the support of setting teams. The average routesetter in the US makes $33k/year. The average scaffolder makes $41k/year. Both jobs are physically demanding, require basic construction skills, and present considerable risks. Routesetters are full-time athletes. Routesetters provide the main product for an industry that pulls in hundreds of millions of dollars annually. I would like to see every gym establish a quality wellness program for the setting team that includes some combination of physical therapists, chiropractors, massage therapists, and acupuncturists. Routesetters should get compensated more and it’s not being said enough.

Lessons Learned from the COVID Crisis (Vol 2): We Are Better...

Chalk Business is Changing Too: Behind the Closures with Kevin Brown