With much of the climbing gym growth coming from new urban gyms with expansive floor space, free weight rooms, lounges, and lead walls measuring 40 feet or higher—it might seem like the industry is in the midst of a Bigger Is Better phase. But as national large-market developers expand across the country, a number of unique smaller hangouts continue to thrive—being perfectly content with niche memberships and a focus on local synergy.

Surveying many of the more compact, locally-owned gyms that can still be found nestled in suburban and rural neighborhoods, one finds that they often proudly consider themselves to be an alternative to the newer, larger gyms “across town.” Since most of these older gyms are limited in floor space and budget, and cannot compete with the larger gyms on an amenity level, they instead choose to stake their claims as the superior climbing facilities for fostering friendships and member esprit de corps.

“We are all about harnessing a sense of community,” says Tom Mizrahi, founder and owner of BrattCave in Brattleboro, Vermont. “We want our gym to be a place where people come to socialize in a healthy atmosphere and be a part of a community. I do think our gym has a certain down-homey vibe that you can’t really get at a large commercial gym.”

Mizrahi founded the 1,100-square-foot BrattCave after living in Spain for a number of years and noticing a trend there of smaller bouldering gyms which were “labors of love” for their respective owners. When Mizrahi returned to the United States following a bad climbing accident, he set out to apply that same smaller gym model to the tight-knit climbing scene in his Vermont hometown. And from its inception, BrattCave has been particularly focused on community and localism. For example, the facility is the result of a crowdfunding campaign run by Mizrahi and his girlfriend, the walls were constructed by hand by Brattleboro residents, the interior design features murals painted by local Vermont artists, and the facility’s door is adorned with Polaroids of its members.

BrattCave also holds a Magic Night when people lounge on the couches and play the popular card game Magic: The Gathering. “I thought Magic players were a group I could reach out to that might otherwise not be seeking out my business,” says Mizrahi. “It’s also just nice to host an event like that in Brattleboro because there’s nowhere else in town that does it.”

Even the holds on BrattCave’s walls were part of a gift registry concept, where holds could be purchased for the gym at myresistry.com. “We’re in a small space in a small town,” notes Mizrahi. “We’ve had a number of people tell us they prefer our gym to big gyms because of our relaxed and friendly vibe.”

Carving Out a Niche

For all its uniqueness, BrattCave operates with a business model that is very much in the norm — patrons can purchase a monthly membership, or they can buy day passes for a fraction of that price. However, another model embraced by some smaller gyms is to operate as a club. For instance, La Casa Pollo in Fayetteville, Arkansas, allows first-time visitors to climb in its 14,000-square-foot facility for free, but returning patrons must commit to purchasing a full club membership.

It might seem like semantics, but by operating as a club rather than a gym, La Casa Pollo has the latitude to put together climbing trips and other outings for its members; in essence, access to the gym is just one aspect of the La Casa Pollo membership. “Joining a climbing club is more like becoming a member of a climbing family than joining a gym,” says Josh Kribs, who runs La Casa Pollo’s facility. “Being a member gains you access to any training, expertise, or gear you could ever need.”

Kribs notes that La Casa Pollo was started in 1990 as a collective for people who wanted to travel to outdoor climbing hotspots and establish crags in Arkansas. It wasn’t until 1994 that a facility was built in response to growing club membership numbers. And that focus on the collective, rather than the facility itself, remains a key to La Casa Pollo’s enduring success (and the success of many small-market gyms) to this day. “Instead of focusing on the money, focus on giving a proper introduction to the sport and safety,” advises Kribs. “Everyone who steps foot in the gym is a potential climbing partner rather than just another customer. Provide them with true one-on-one training, and they will repay you with hours of fun at the gym.”

La Casa Pollo possesses its own homegrown spirit. Rather than having walls and murals painted by local artists like BrattCave, the climbing holds themselves are connected to the town of Fayetteville: More than 3,000 of La Casa Pollo’s holds are made of actual rock from around the region—and the natural holds are even available to club members for purchase. Kribs says that the concept of using stone on indoor walls came as a result of plastic holds feeling “unrealistic.” He says, “When training in the gym, you want it to be like the real thing, so we wondered, ‘Why can’t it be?’ After a couple months of trial and error, we’ve developed a tried and true method turning natural rocks into bomber holds.”

In terms of maintaining that close-knit feel with the land, the town, and the local climbers, Kribs says the key for any smaller gym is to be reciprocal. “There are endless ways to build that sense of community in your club or gym,” he says. “One of the most important things is to give back to the community. Work with your local climbing organizations to help fund crag cleanups, host safety training events, and return the love that the community has given to your club or gym.”

Looking to the Future

While a lot of smaller gyms around the country partner with local organizations and implement local crag cleanups, those are likely not the key driving forces in retaining members. In fact, the popularity of unique facilities like BrattCave, La Casa Pollo, and others likely lies in aspects that are less tangible: “When you come to the gym, you can expect to be greeted by the club dog, Bodhi, right away. There’s coffee on, good tunes, people chilling and people workshopping routes,” says Devin Greer, when describing what members will find on an average night at Solow Bouldering Club, his 1,000 square-foot, lowball facility in Milwaukee, Wisconsin.

Greer, who was also inspired by the bouldering gyms in Europe, and garnered the help of family and friends to construct his gym last year, makes a point to keep Solow focused on its core customer base with varied skill levels. He notes that his gym appeals to “the dirtbag climber in all of us,” and everything—from the music that is played on the gym’s speakers to the routes that are set on the walls—is done by members rather than a staff. It all contributes to a closeness and interdependence that patrons have responded to positively.

“Our size definitely makes building community easier,” Greer says. “We just make sure to be genuinely interested in our members, their climbing lives and what they’ve got going on otherwise. We also try to get everybody connected and interacting with each other when they’re at the gym.”

But as the industry becomes ever more bifurcated with large chain gyms and smaller, more rustic facilities, the question arises whether the modestly-sized gyms can continue to survive and thrive.

“It’s easy to treat everybody like family and make them feel like this is their home away from home,” notes Greer. “Once people realize that bigger isn’t necessarily better, they get exactly what they need and feel better doing it. Not to mention more affordably!”

Kribs at La Casa Pollo echoes this sentiment: “I think the industry trending towards the franchised gyms is concerning, but at the same time it isn’t,” he says. “It is concerning because the small community-based gyms are slowly getting swallowed up by the larger franchised gyms. On the other hand, the franchised gyms are introducing more and more people to climbing, which is great! I think it will become harder to find the ‘family feel,’ but we feel the occasional climbing club will pop up to fill that niche.” 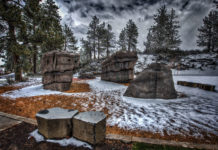 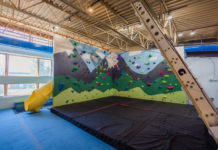 The Spot Makes Moves To Denver