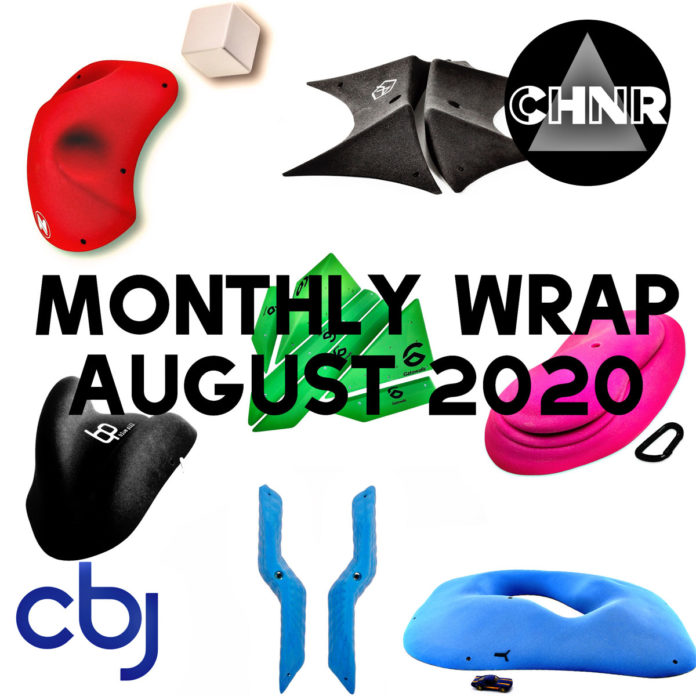 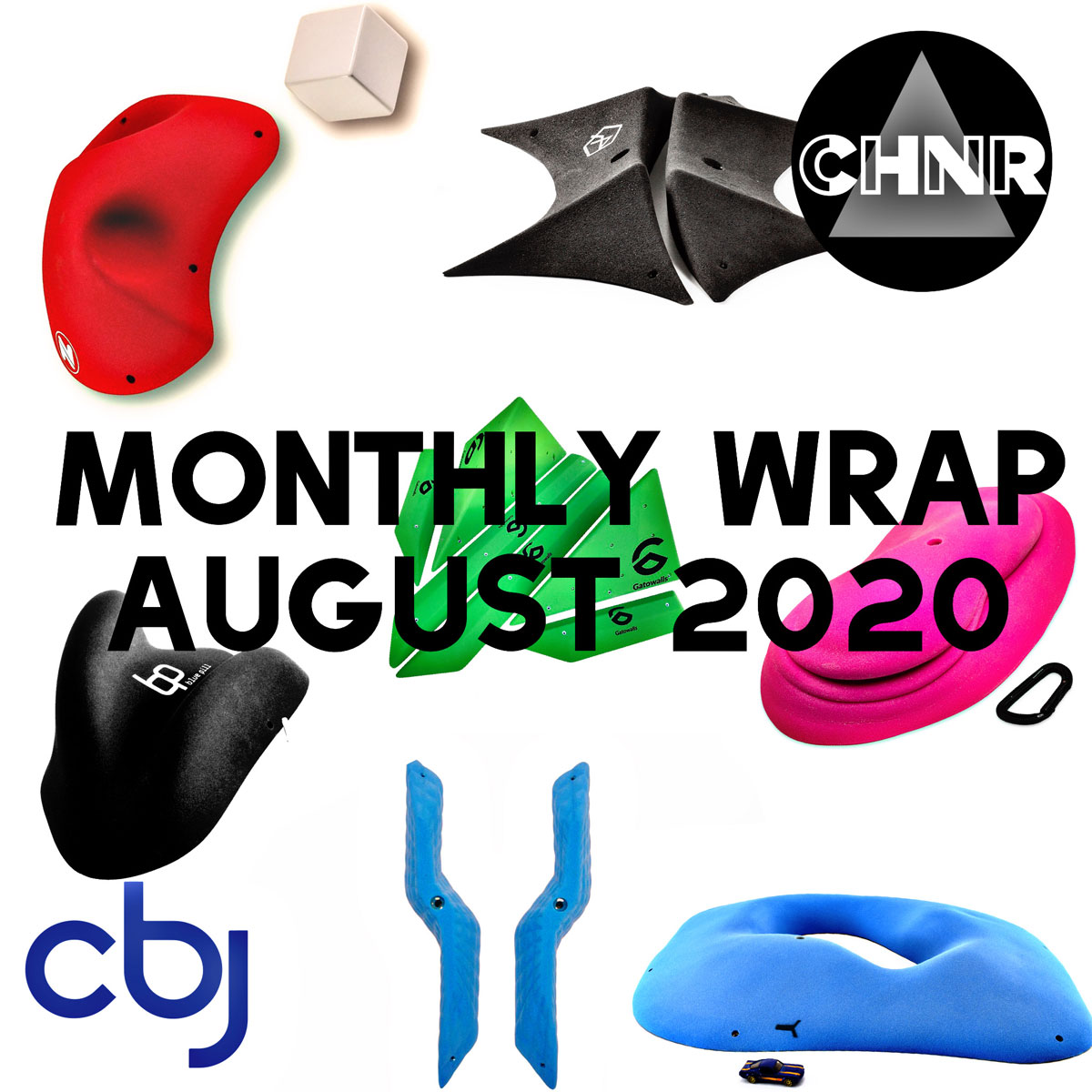 Welcome to August Monthly Wrap in cooperation with Climbing Hold News Reviews where we will bring you the latest in climbing holds, macros and volumes. Odd enough, even though we aren’t quite to Halloween, a Bat hold theme emerged this month! We hope you love this as much as we do! 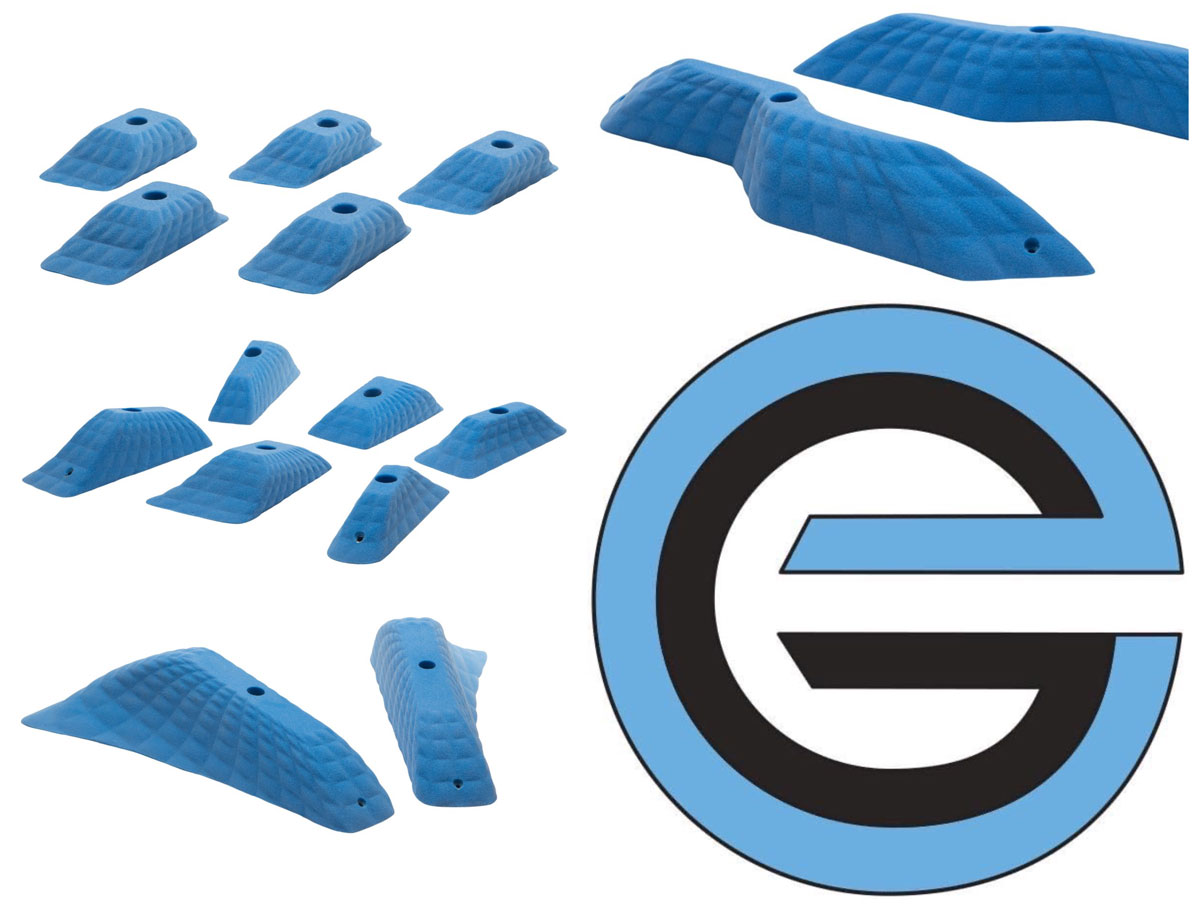 E-Grips has released several new 3D rendered shapes this month which were shaped in collaboration with Render Climbing. The first set of the 3D rendered shapes is the Mosaics which feature symmetrical textures, precise angles, and the ability to exactly scale to any size. The texture also “forces climbers to make small haptic adjustments after grabbing the holds.” They will be starting this series with the Mosaic Mini Jugs, Mini Pinches, The Bolts and the Mirror Pinches. They are also releasing the Sand Dollar Slopers and Sand Dollar Dome, which also feature a unique texture, and the Bat Wing Edges and Ledges. e-grips.com 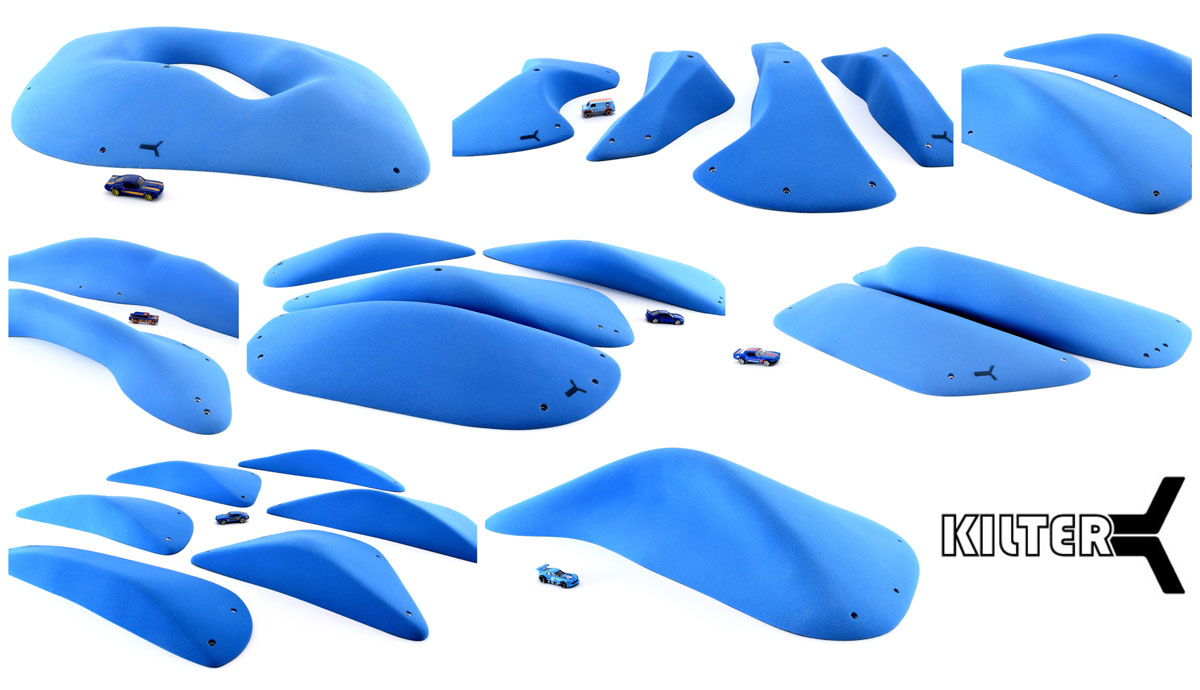 Kilter has released all kinds of new grips for the month of August. They released over 55 new fiberglass shapes from Walltopia including expansions to previous series such as Winter, Noah and Flö. A new series, Wingate Sandstone, has emerged and features pinches and ledges with crisp yet rounded edges and gently sloping sweeping curves. In addition, they also released many new polyurethane holds from Aragon and Composite-X such as new Granite Kaiju, Granite Complex, Brushed Sandstone Ribs and Fins, Sandstone Mixed Edges, Noah Fins, Jimmy’s Southern Sandstone Kaiju Slots, and Winter XL 90 degree, 60 degree, and 30 degree stacks which are customizable holds able to be blocked by each other and other Complex series holds at each specified angle. Check out the link below under the New Holds section to see the full details. settercloset.com 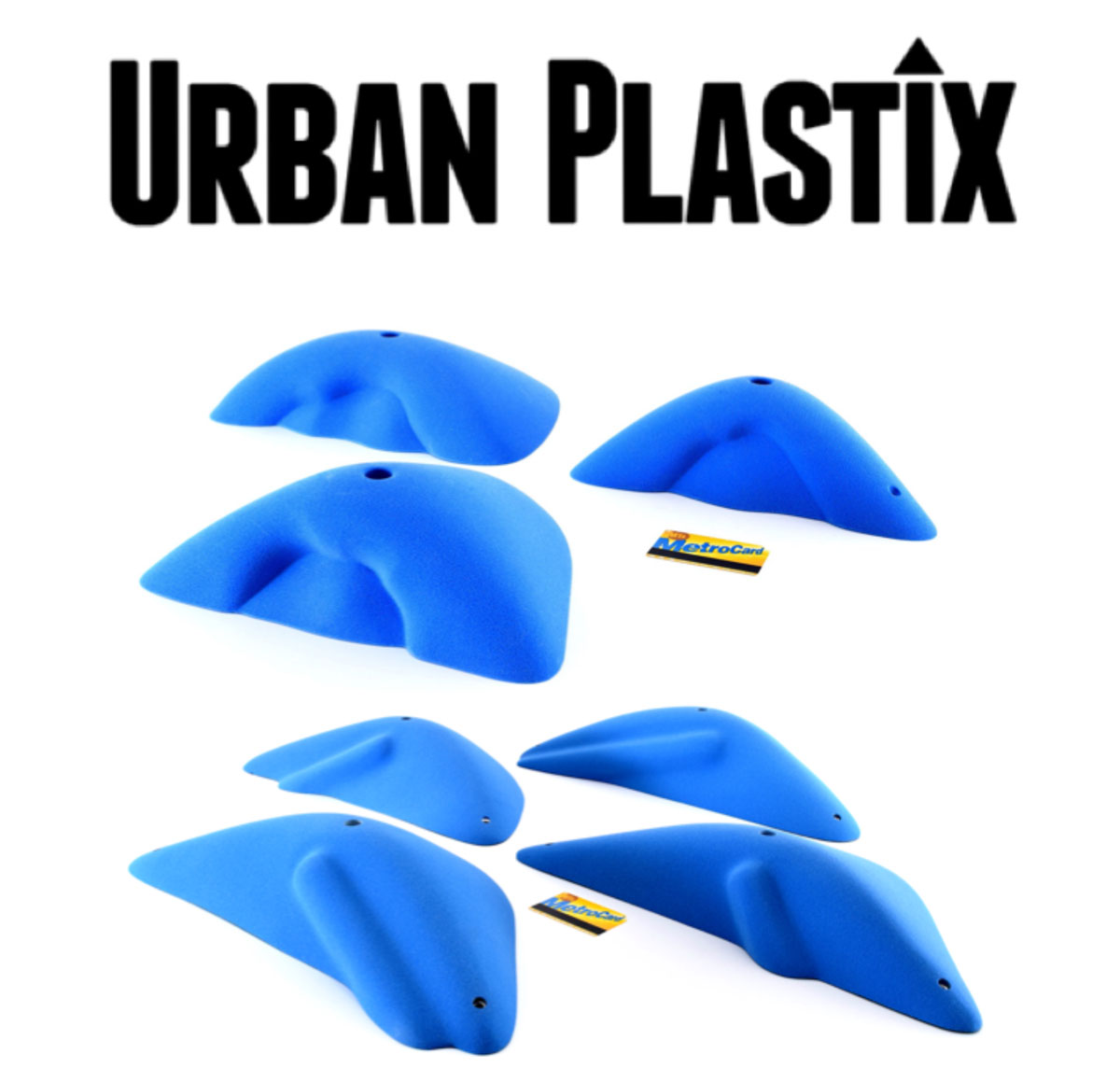 Urban Plastix is new to the fiberglass game but also released some new shapes with the new XL Speed Bumps. July saw the release of a new PU line called the Strato series and in August the line was expanded with the new XL Strato Sloper Ledges. Check out our July Monthly Wrap if you missed it. urbanplastix.com 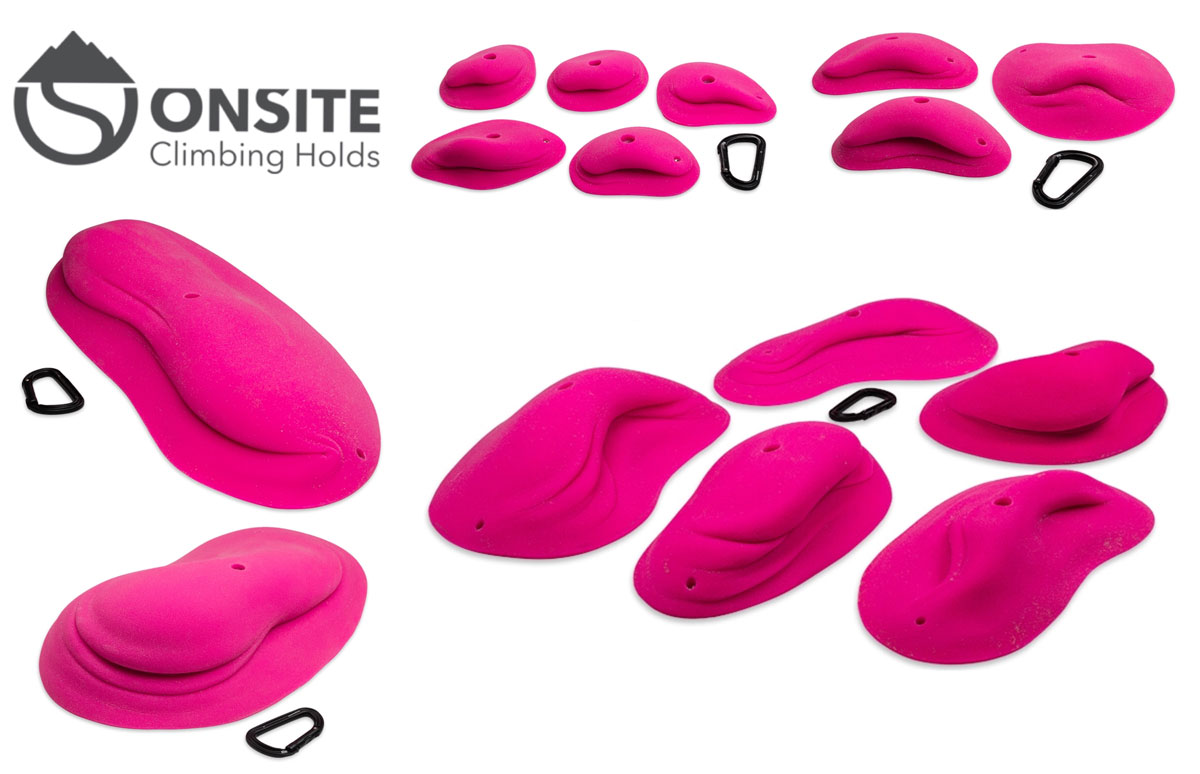 OnSite is undergoing a relaunch and has released their first line, the Epidermals, which are poured by Proxy / Vertical Solutions. This line is a series of crimps that look like rolled up skin or fatty tissue which is exactly from where they derive their name. There are currently holds available ranging in size from medium to two jumbo features with more planned on the way soon by mysterious shaper/climber Heel Hook Harry out of Wooden Mountain Bouldering Gym in Loveland, CO. onsiteclimb.com 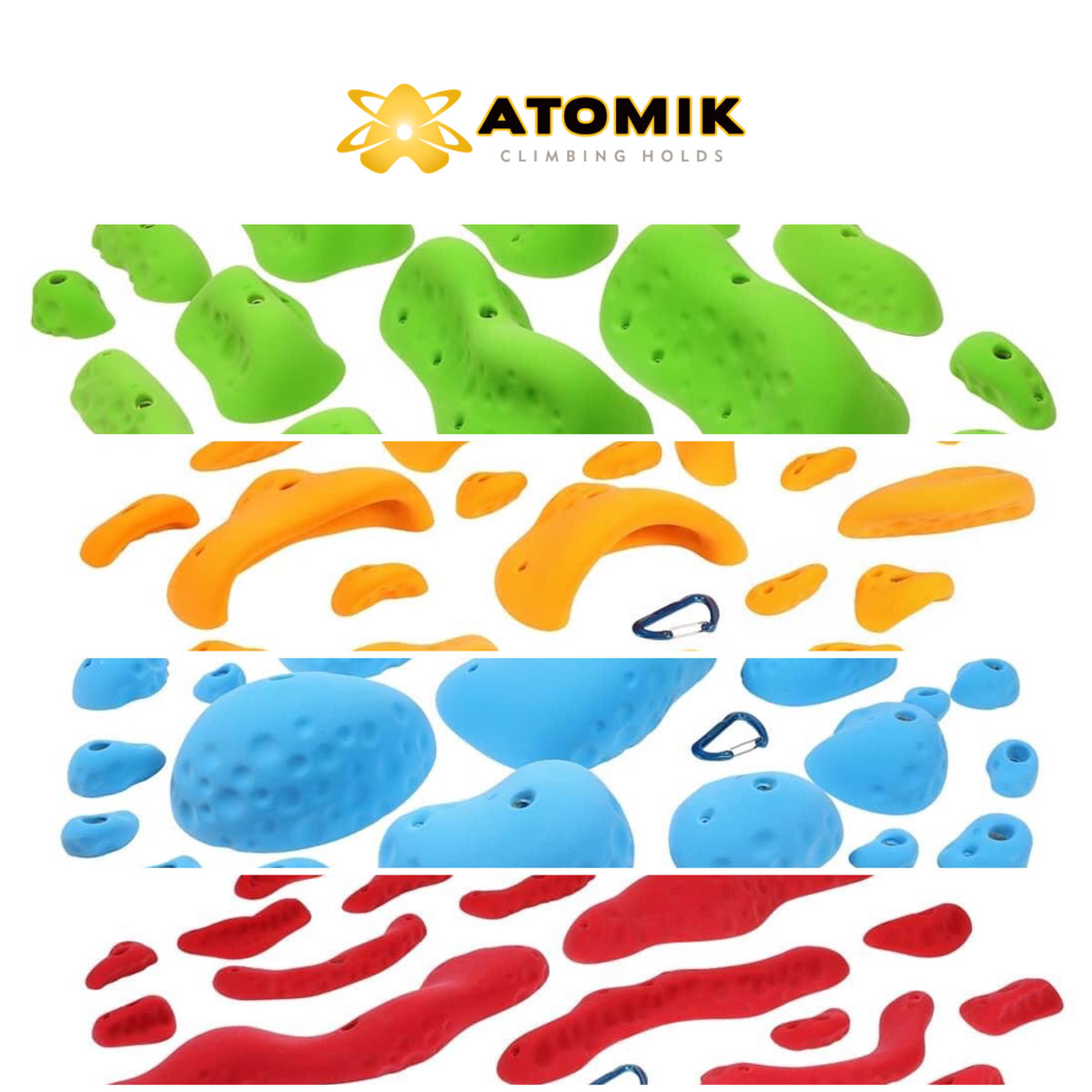 Atomik has officially released about half of their newly reshaped Golfus series with more expansions are planned for the future. A recent post on their social media shows the variety of hold types this series possesses including Pinches, Jugs, Slopers and Rails all possessing the characteristic dimpled texture of the original Golfus series. The rest of the Golfus line is due to release soon. atomikclimbingholds.com 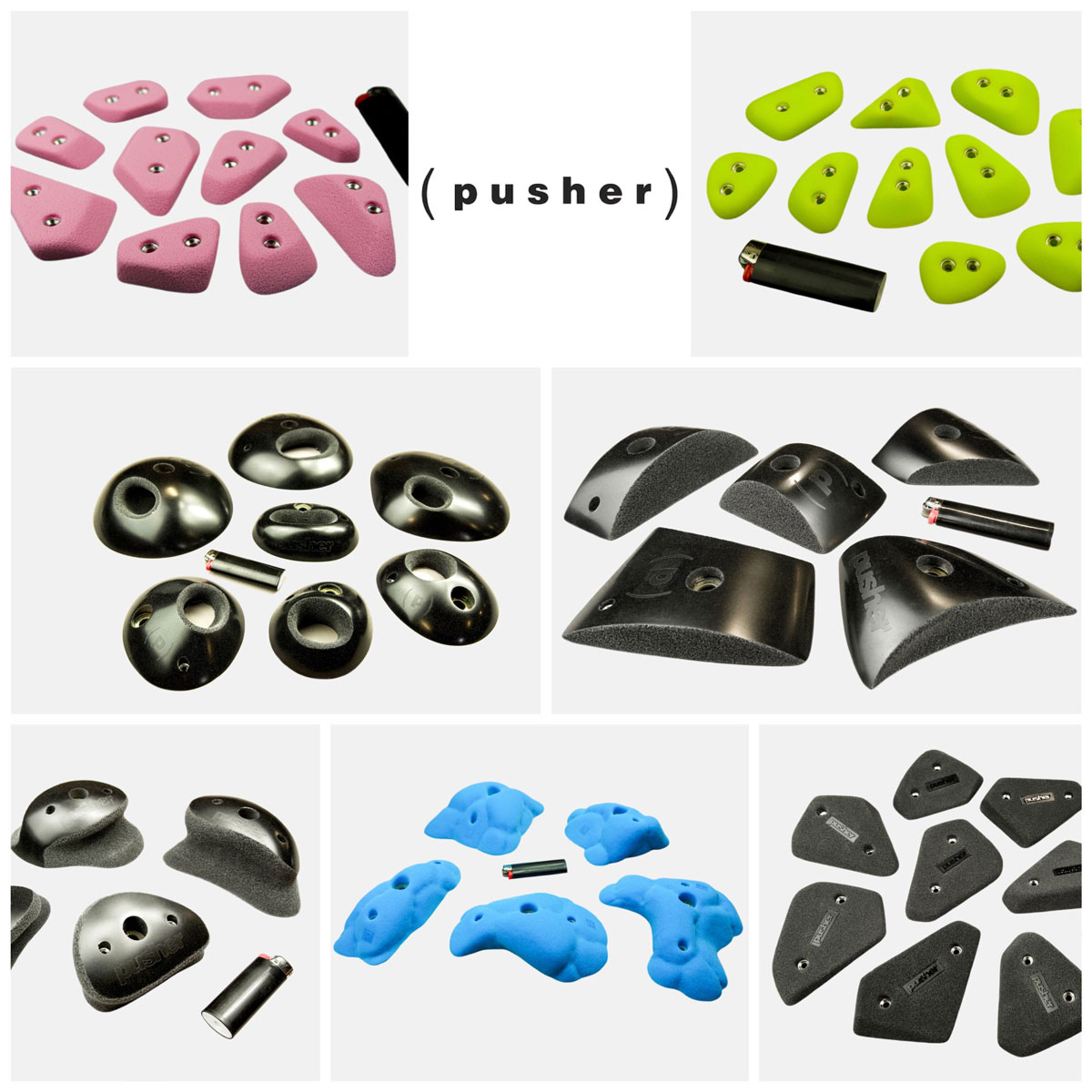 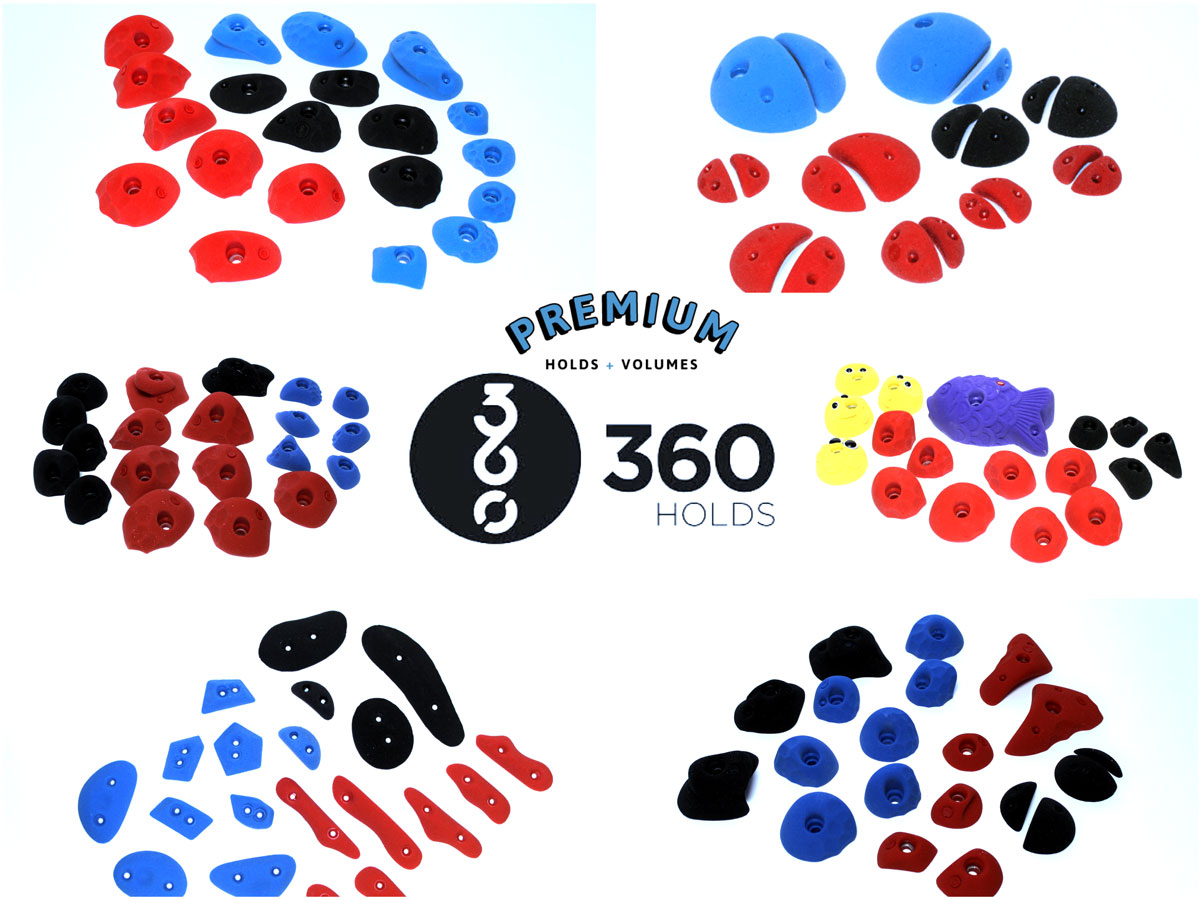 360 Holds is expanding from their commercial roots and releasing new Home Climbing Wall Kits. There are a total of six sets including holds for kids, beginner, intermediate, advanced as well as a micro kit and home wall start up set. These holds are available exclusively through Premium Holds based out of Dallas, TX. 360holds.com premiumholds.com 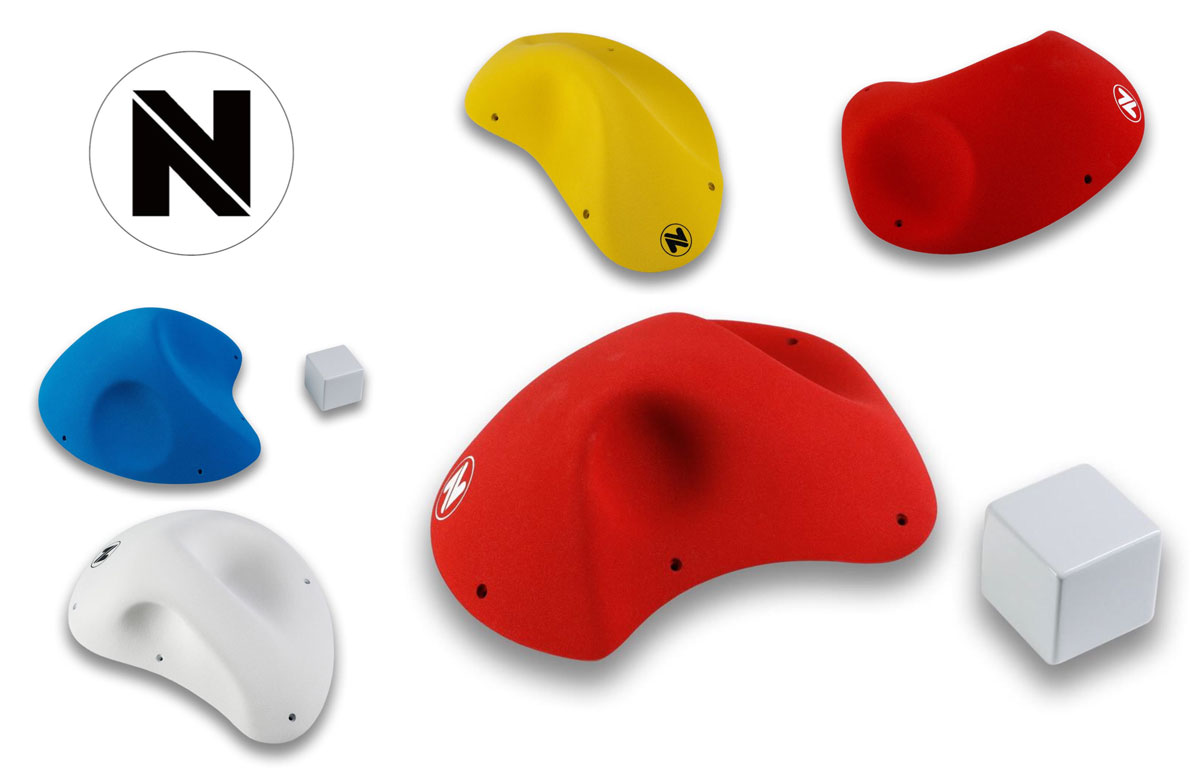 Neo Holds is a South Korean based company which is releasing their second generation macros designed in collaboration with 360 Holds. There will be a total of twelve variably sized scoop macros with six in the Genesis series and six in the Absolute series. These macros do not have a flange and feature reinforced washers standard with 360 Holds. They will be available in the standard ten 360 Holds colors, available in Europe through the Holds Gallery and Butora in Asia. They are not yet distributed in the United States though that will likely change in the near future. neo-holds.eu 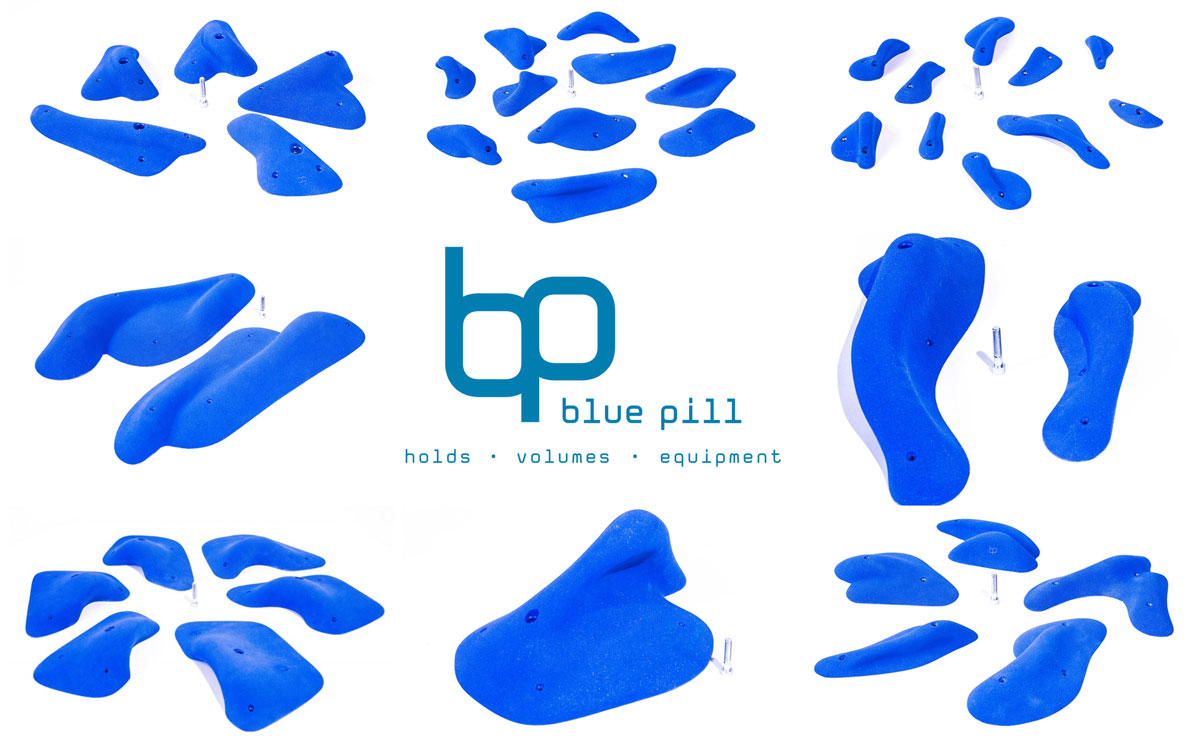 Bluepill has released the Originals which are a series of bulbous crimpy and sloping lips in both fiberglass and polyurethane (shown in blue). Bluepill macros and volumes are distributed exclusively by Blocz Distribution in the United States while Bluepill holds are poured and released exclusively by Proxy (Vertical Solutions) in the United States. bluepill-climbing.com 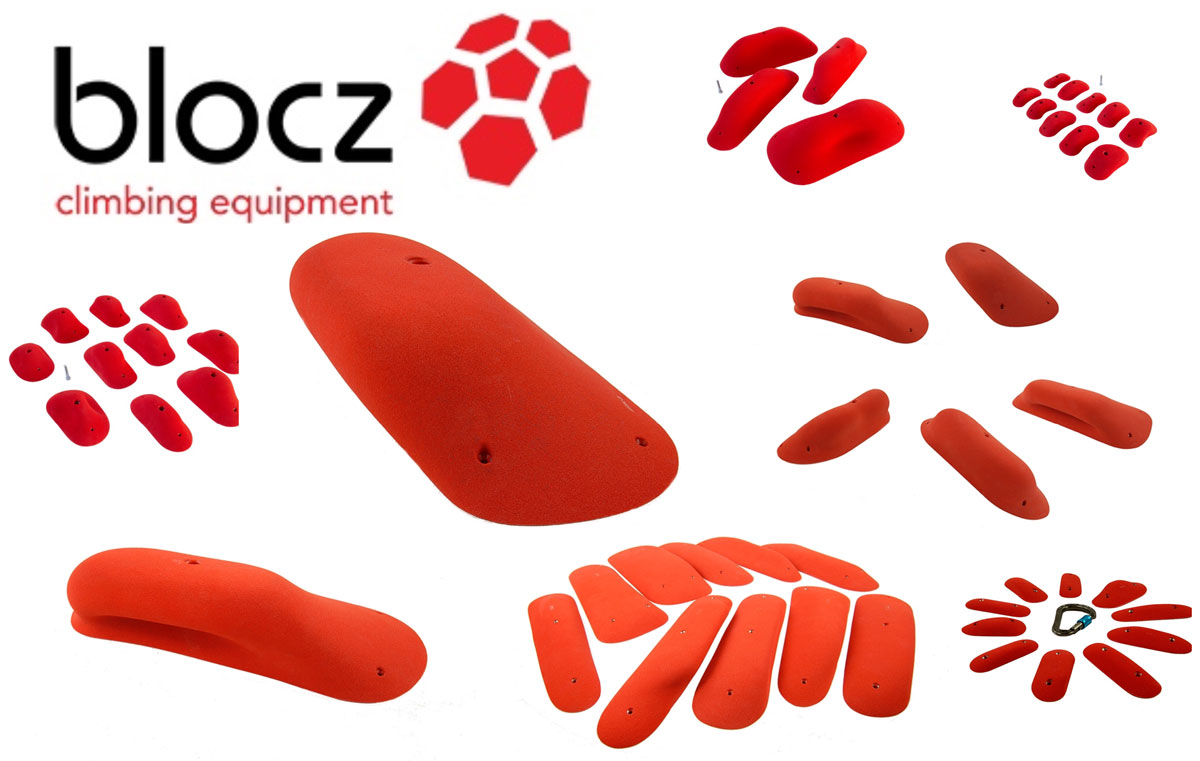 Blocz is releasing a series of bread-inspired names with a mixture of screw-on and bolt-on polyurethane edges, jugs and pinches. There are a variety of holds ranging from small to 2XL sizes which expand their existing lines of edges, jugs and slopers. blocz.com 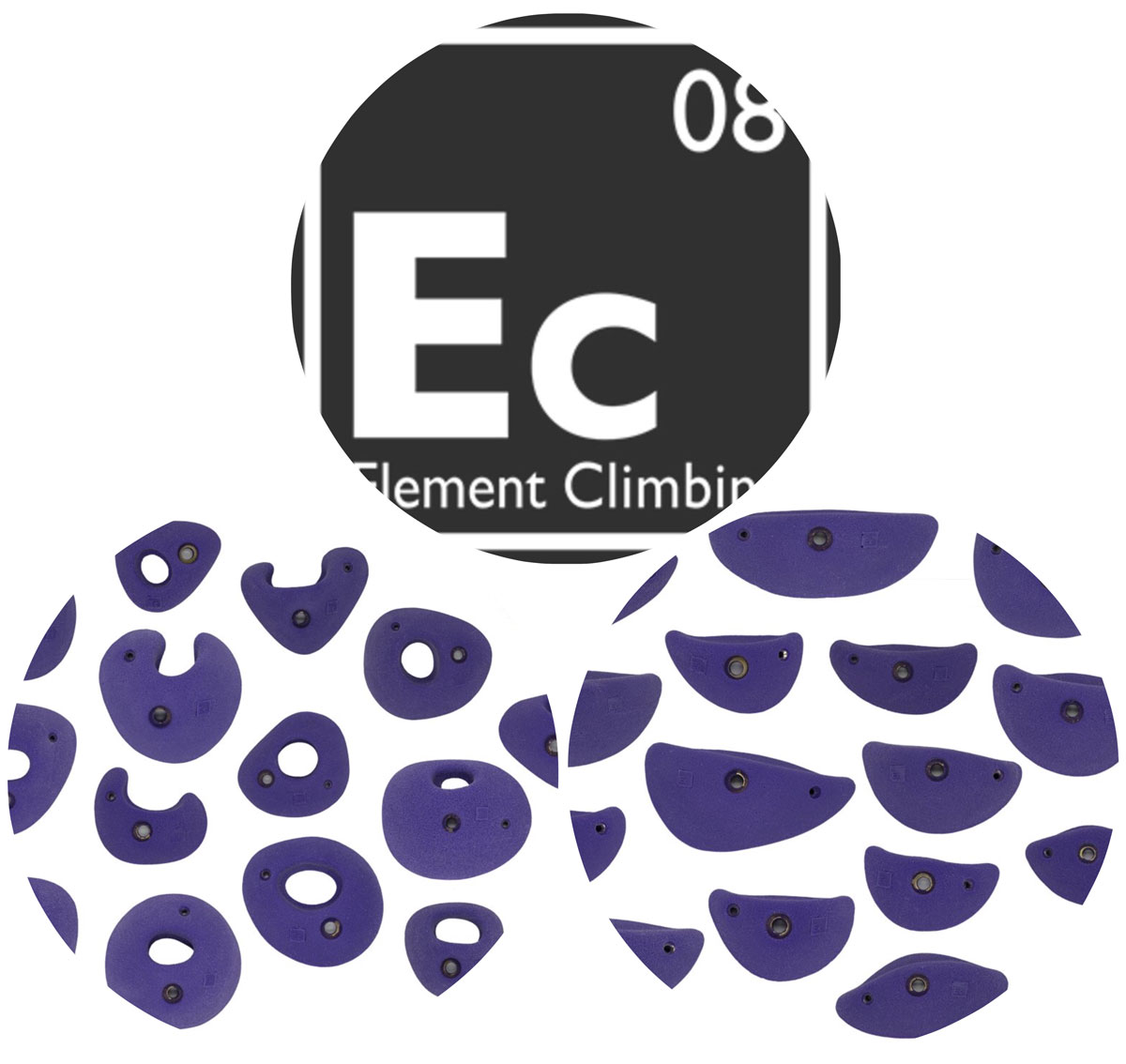 Element has been quiet for a while, but new releases are on the horizon including these two new sets shaped by master shaper Louie Anderson – the Confluence Pockets and Crimps. These are an expansion to the existing Confluence series featuring smooth stalactites, pinches, jugs, edges and jibs. The new two new pocket sets and four new crimp sets are available individually or together as a super set. elementclimbing.com 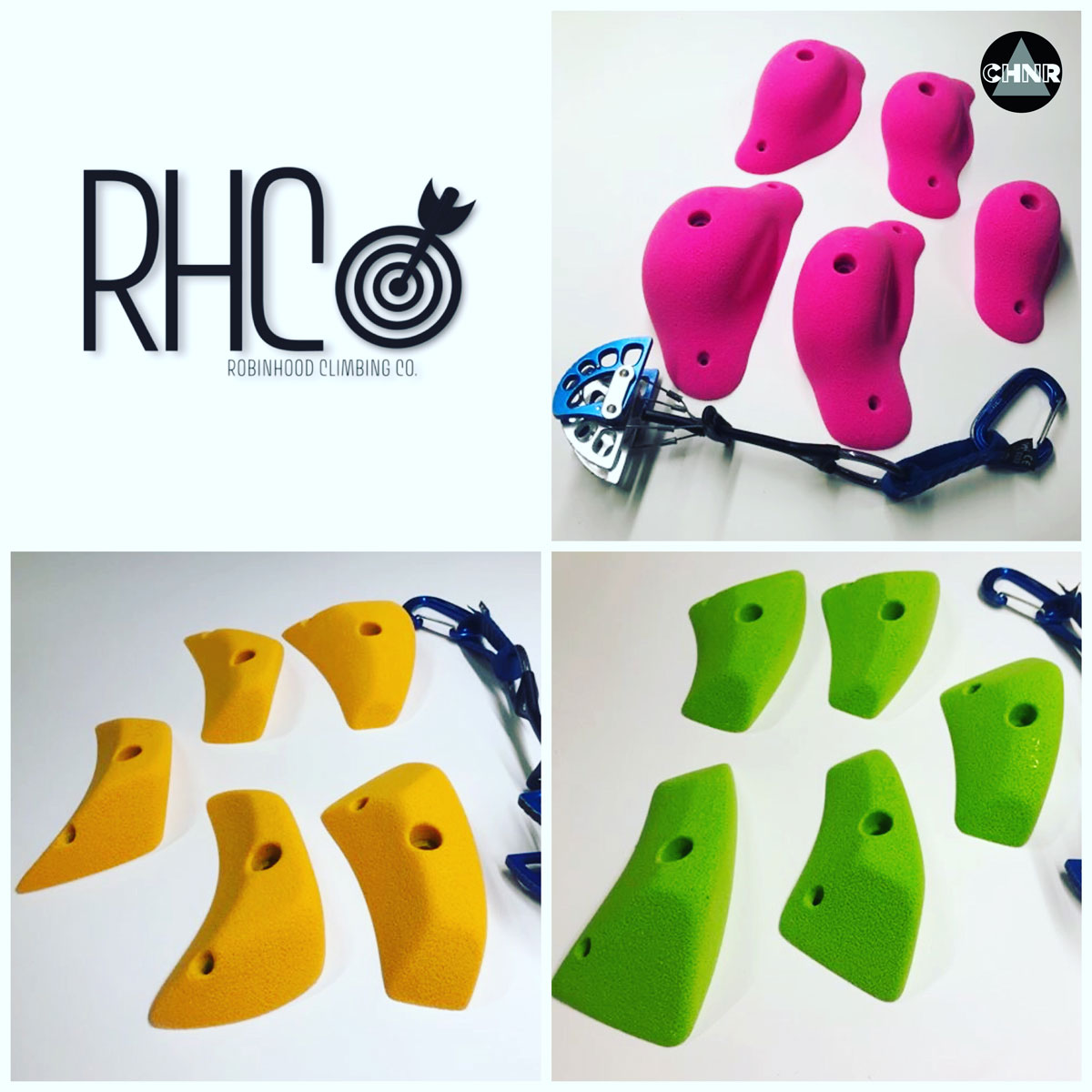 Robinhood has released three new sets which is giving us a preview of things to come. Introducing the Medium Foundation Flat Edges (in green) and Incuts (in yellow) as well as the Medium Slug Pinches (in pink) all shaped by Andy Nelson of Method Grips. robinhoodclimbing.com 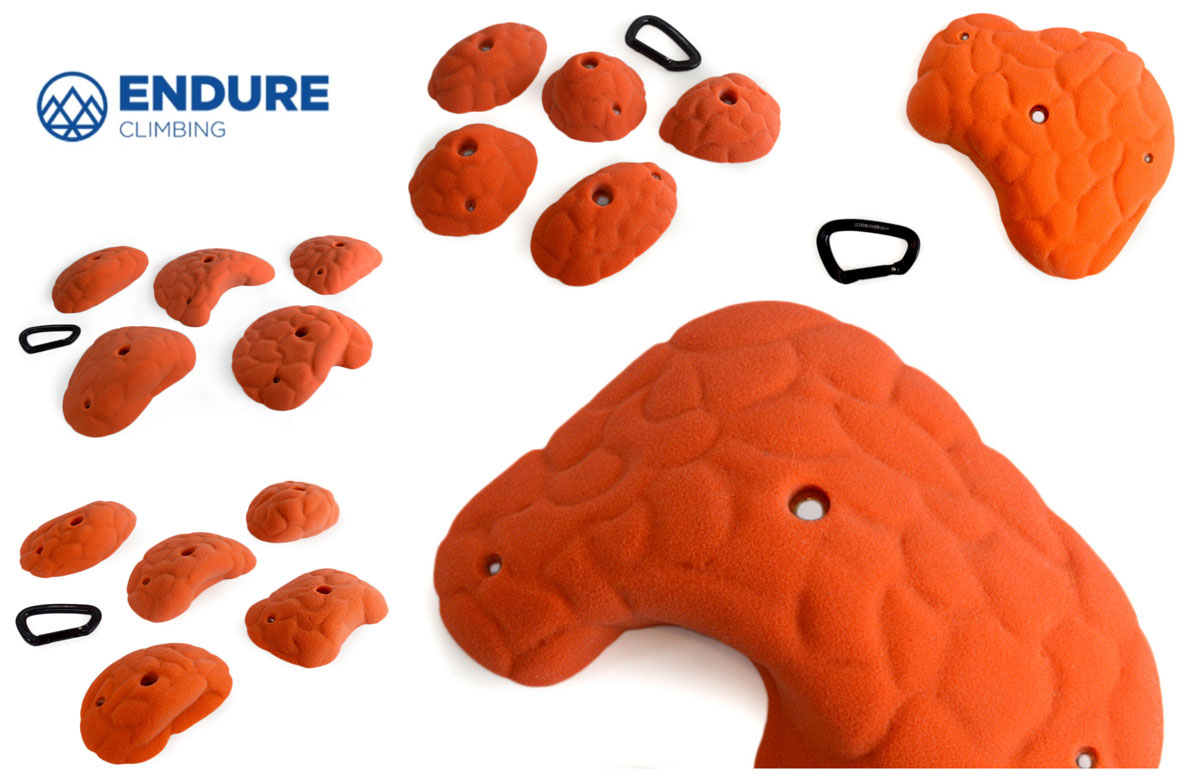 Endure is a small batch holds company based out of Richmond, VA. Recently they have released the Furrows which were carved by experienced shaper Kegan Minock. These holds are a series of Font-shaped holds ranging in size from small to 2XL currently with several larger features planned, together the most complete series Endure has released to date. They have also released a newly redesigned set of Teacups which are smooth positive jugs in different incremental sizes. climbendure.com 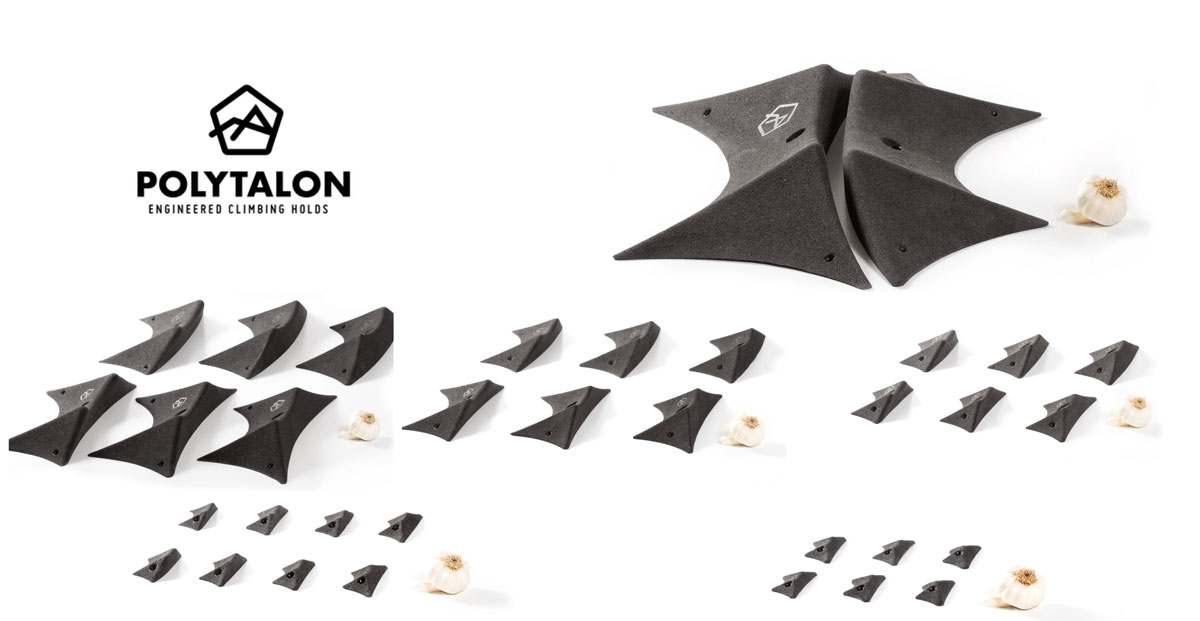 Polytalon is a German-based brand which features highly engineered production processes. Their latest series The Bats were 3D modeled and produced with conventional yet upgraded eco-friendly manufacturing. The Bats are a series of variable size and angled edges designed to be used together as blockers which will be available in both full texture and dual texture. The series ranges from XS to 2XL in size and are currently available in eight colors – but why would you want the Bats in any other color besides black? polytalon.com 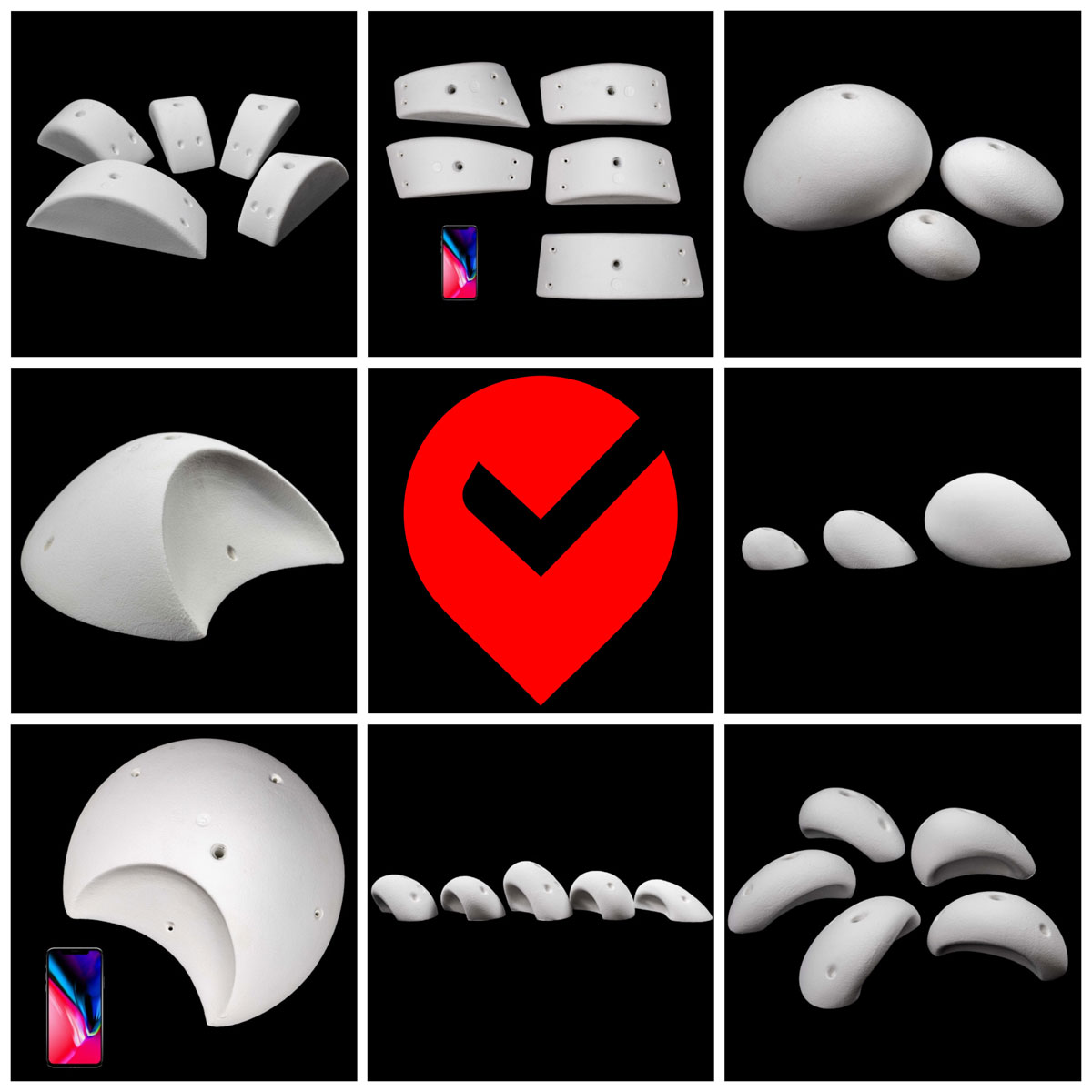 Satellite is a hold company from Japan that has recently released tons of new grips from XS to multiple XL shapes. They have recently added on the Decamaboco pinches, Super Round Jugs, Ball Ball slopers and the scooping dish Apollo 2XL holds #4 and #5. We also spotted the Shinka 2XS sharp and mild crimps on their website. Satellite Climbing is exclusively distributed by Solostile Climbing Lab in the United States. satelliteclimbing.com 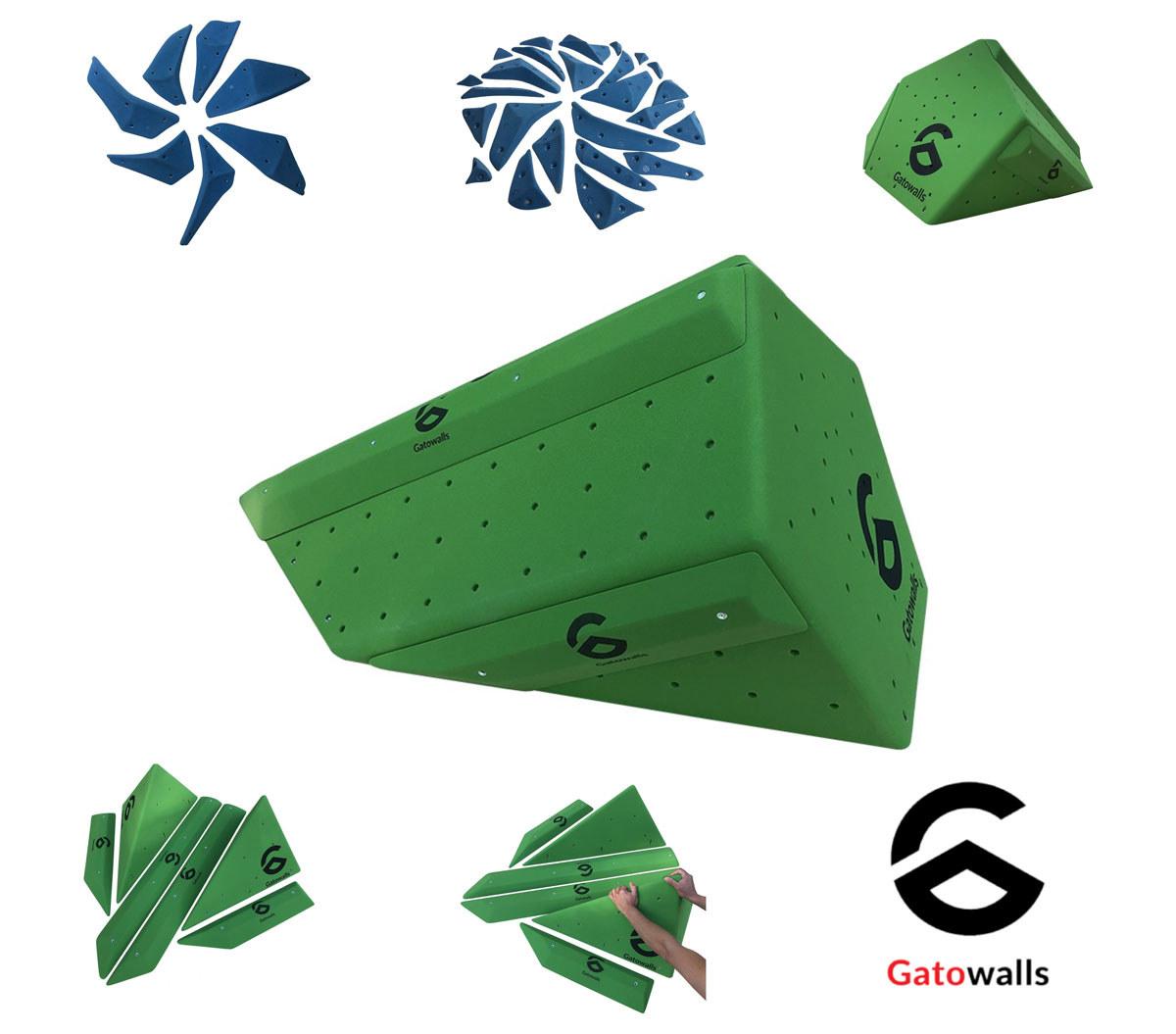 Gatowalls is a newer producer of climbing holds, macros, volumes, training equipment and climbing walls out of Poland. This month they continued growing their line with the new Pentagon shaped volume (shown in green) as well as additions of the Titanic I and II as well as the Pyramith I, II and III volumes. These are symmetrical left and right sided volume add-ons which are specifically designed to fit on the Pentagon volume. They have also released a new line of holds with the Wings I and II (in blue) which are comp style edges shaped by Michau Jedrzejewski. gatowalls.com 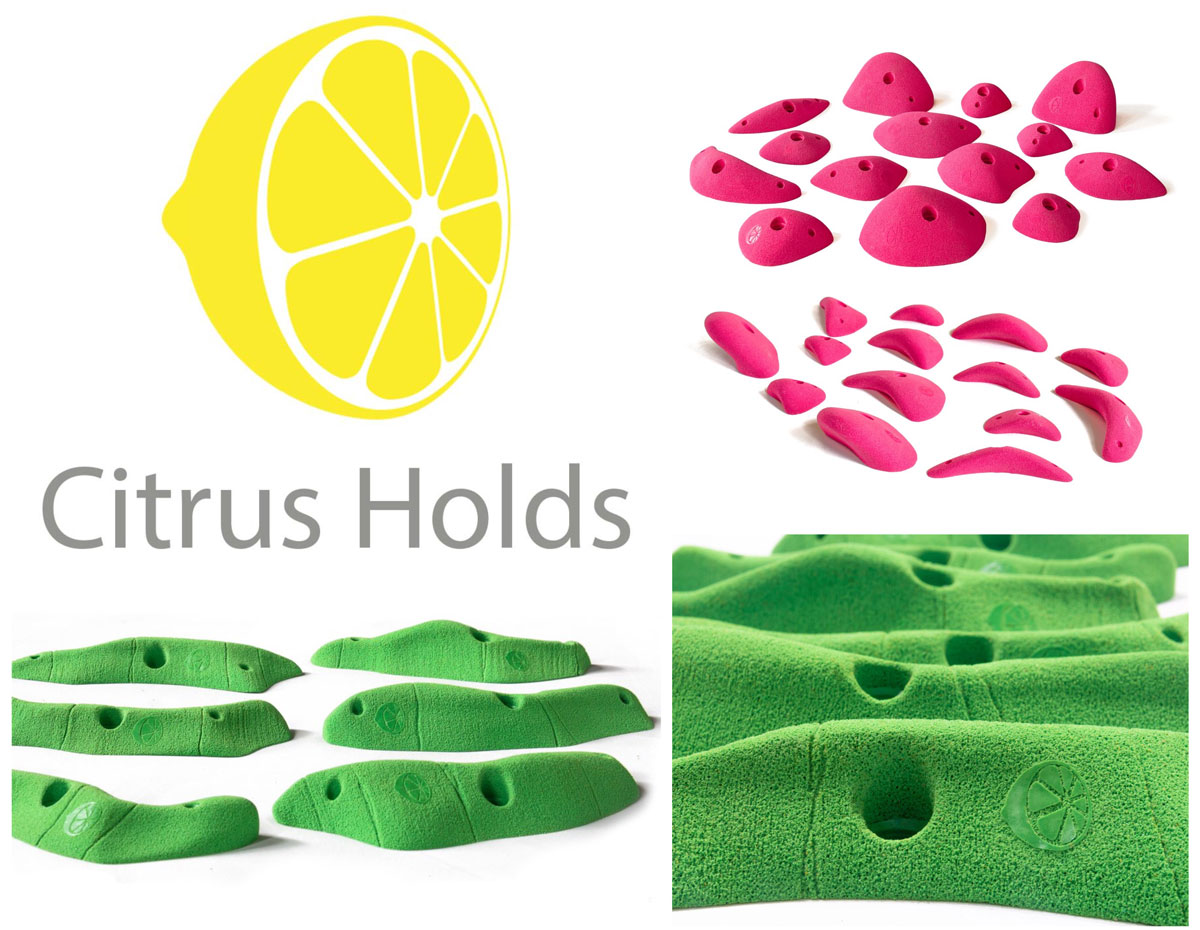 Citrus Holds based out of Canada is a brand that we haven’t seen much of in the US yet, but their available hold lines are growing quickly. They have recently released the Basic Jugs (shown in pink) which is a series of fourteen variably positive holds designed specifically for easy walls / climbs. The Sandstone Fossils (in green) are also new and are six rail and pinch shaped holds which are wide enough for both hands. citrusholds.com 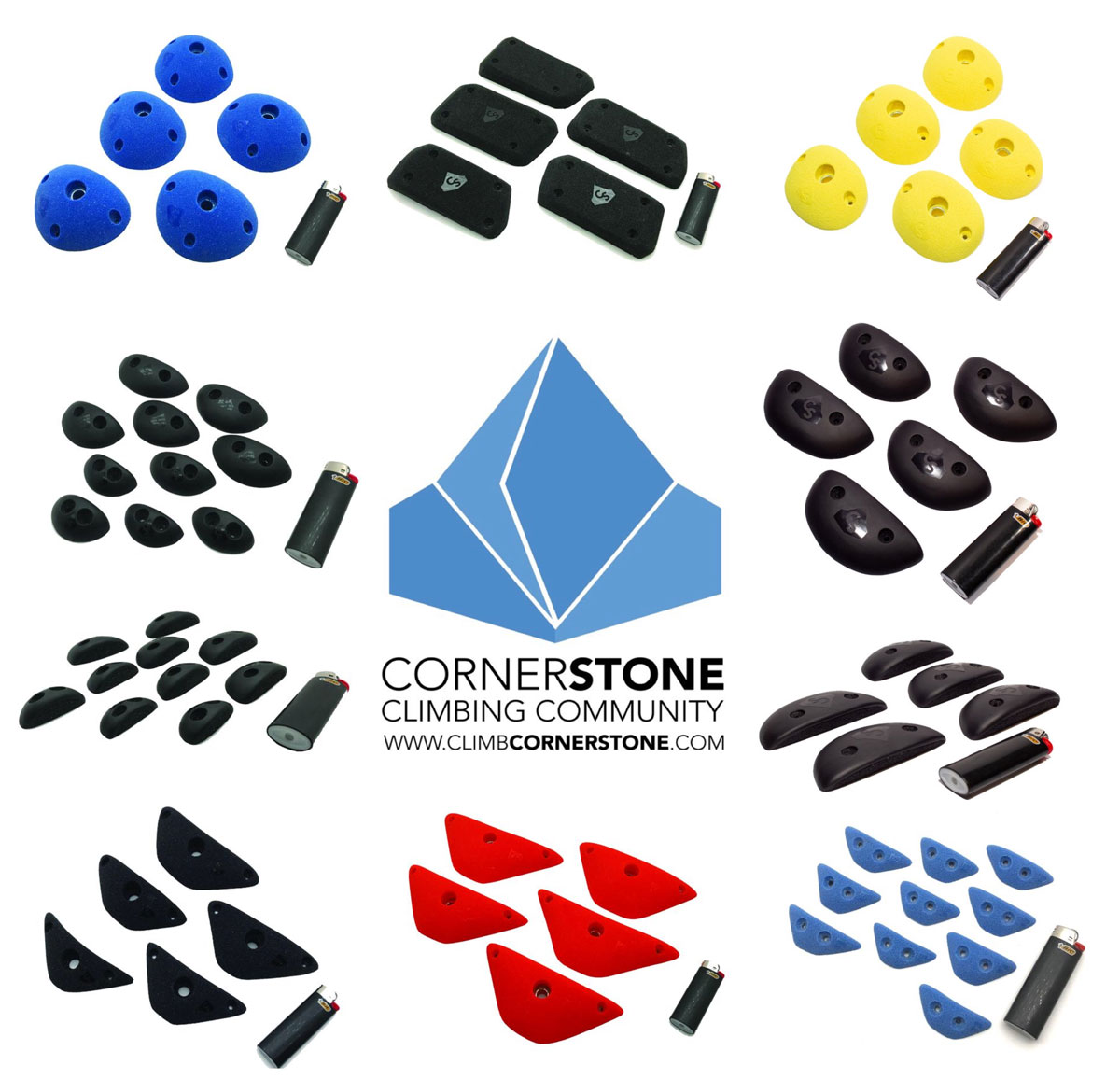