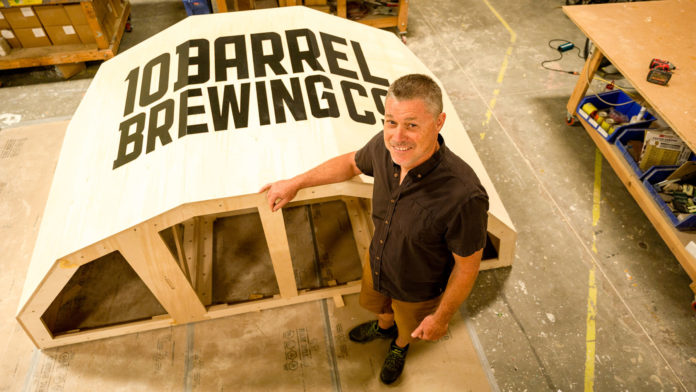 In the four years prior to Sander Culliton being named EP USA’s CEO, the company had four different CEOs. Now Culliton has served as CEO for more than four years himself. EP USA is an owned subsidiary of a large French corporation, and the company is determined to keep manufacturing in the United States—not an easy or inexpensive goal. Culliton’s leadership has shaped and guided the company by focusing on its biggest asset: the people of EP.

Around that time he fell in love with climbing, which led him to manufacturing climbing holds in his garage in San Carlos, California. He split his time working at job sites during the days and shaping holds in the evenings. By the early 2000s he quit construction, moved to Bend, Oregon, and devoted full-time effort to Stone Age Climbing Holds, his hold company. Eventually he sold Stone Age to Touchstone Climbing in California, one of his previous customers, and returned to construction.

Around 2010, the recession prompted him to look for the next thing. “I called my friends at EP, who were my competitors, but were also my friends,” said Culliton. “And I said, ‘hey, do you think you’d have a use for a guy like me, with my skills?’” It turned out they did, and they offered him an entry-level sales job. Culliton was excited by the new challenge, and tapped into his roots in shaping holds for EP as well. Eventually he was recognized as the number one wall salesperson.

After about five years, EP went through a period of transition and Culliton left to work as a construction manager for a tire company. Then the CEO of EP International called to say they were hiring a President of EP USA, and suggested he apply. Culliton did not get the job. Instead the position went to Steve Matous, who brought Culliton on as the Sales Director.

After about a year, Matous left for other opportunities and Culliton found himself serving as EP USA’s interim CEO. “It’s a position that I’m uniquely qualified to do because of my background in construction, manufacturing, and the climbing industry,” Culliton said. “EP is essentially a specialty construction company and manufacturer.” His role as CEO soon became permanent.

“The thing I was the most excited about was to try out my leadership approach, my idea of what a sustainable long-term business culture looks like,” Culliton said. In his previous years at EP he noticed that the company sometimes struggled with a couple of things. The first was work silos.

“We have a really big sales and design department with project managers, drafters, salespeople, and designers who work on computers and sit in comfortable chairs and in the summer have air conditioning,” Culliton said. “The other half of the company works in our shop and they are cutting wood and steel, welding, painting, working in freeform, which is fiberglass. There’s dust, there’s noise, there’s heat, it’s smelly. And it’s not easy work.”

Sometimes those two halves would butt heads. Other times poor cooperation across departments led to frustration and inefficiency. For example, if a salesperson sold a project to a client for a certain price and the project manager had no input, it was possible for a project to be sold with an unrealistic budget. “So the first thing I set out to change was how we approach each other, the nature of our communication, how we talk to each other,” Culliton said.

Now a salesperson cannot suggest a price to a client without a project manager’s approval. The teams have hand-off meetings at different stages of sales, design, and production. And at the conclusion of a project, they hold debrief meetings to assess where things could have been done better.

Allowing People to Do Their Best Work

As part of facilitating more streamlined workflow and cooperation within the company, Culliton places a heavy emphasis on workplace communication. The goal is to create an environment where people can do their best work.

He noticed that sometimes people would get marginalized over petty differences, which would then cause the product to suffer. Instead, he encouraged people to talk through issues, work out problems, and bring those who are marginalized back into the team. His staff attended leadership training to learn how to better talk to one another.

The second thing Culliton noticed that EP had struggled with in the past was transparency. Employees were not always aware of what was going on with the company, which sometimes led to frustration and disgruntled workers. Instead, Culliton employs an open-book management style, meaning he wants everyone in the company to know what is going on, good or bad. “I know I’m not the smartest guy in the room and that I’m surrounded by people who are incredibly talented,” he said.

When people know what is going on, they often find creative ways to help, partly because it impacts them but also because the more minds working on a problem, the more potential solutions are presented. “All of this applies to the client too,” he said. “The client gets transparency, the satisfaction of being really involved in the process, and free training and advice. Plus they get to participate in some of the really difficult decisions.”

To formalize his policies on communication and transparency, Culliton and his team developed a value statement to guide EP USA in its operations:

Quantifiable benefits are a direct result from EP’s extensive experience and ability to integrate with your team from the start of each project. We demonstrate flexibility, collaboration, and transparency internally and with our clients. Combining this with our years of experience allows us to reach the same positive goals; providing the best designs and workmanship in the industry while simultaneously anticipating conflicts in the construction process and reducing risk.

Sailing Toward Success (or Fulfillment)

“The organization is the ship that we’re all trying to guide to success,” Culliton said. “I also like to say fulfillment because success, to me, is about money while fulfillment is about satisfaction and happiness.”

Culliton’s goals for guiding the EP ship to greater success and fulfillment is to become more efficient to better compete in the market. He also plans to continue to improve in the realms of transparency, collaboration, and flexibility. Most importantly, he hopes that as a leader, he is fostering growth and leadership within EP so that there are excellent people to take the helm when he leaves.

Ultimately, he sees the people of EP and the way they work together and with clients as the company’s biggest strength. “What I’ve tried to do is bring people in here who have their own path in front of them. People who are talented and engaged, who want to take charge of something and make it better,” he said. “I think my story is a perfect example of that, right?”

EP Climbing is a pioneer in the climbing wall and accessories industry, designing, manufacturing and installing custom solutions for the sport of climbing around the world. EP is active in a variety of markets: from commercial climbing gyms to school & university walls to complex structures for regional/national/international competitions, tactical training, and outdoor parks. EP offers solutions that cater to every environment, climber and climbing discipline. Built in Bend, OR since 1985.