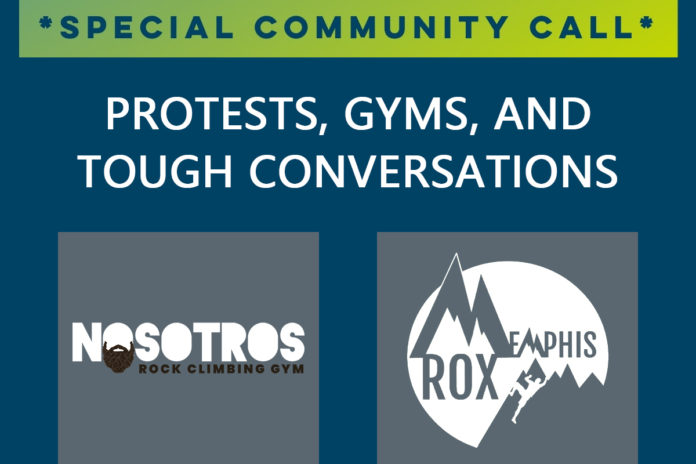 The Climbing Wall Association (CWA)―which has been hosting community calls for climbing gyms during COVID-19―held a special community call last Thursday on “protests, gyms and tough conversations.” The call involved representatives of the nonprofit climbing gyms Memphis Rox and Nosotros, who shared their experiences and communication around the ongoing recent protests.

Below are 6 points from the call that stood out to us at Climbing Business Journal.

This Conversation Is Not New

Garnet Moore, Director of Operations at CWA, acknowledged in the beginning of the call that this conversation is not new. There is a long history of racism in the U.S. and collective action against it, and the current protests are recent events in that struggle. Some actors in the climbing industry have already been starting these conversations, and a renewed national conversation presents an opportunity to accelerate or amplify previous efforts.

“It’s important to recognize―even though this is a particular moment―it’s one in a long, long series of moments where we’ve gone through similar situations in our country,” said Moore. “This isn’t a new thing, this isn’t a new issue, and it’s something that hopefully can be carried forward and we can engender some change, at least in our small corner of the world.”

We Will Make Mistakes

Also at the start of the call, Moore pointed out that we are all susceptible to making mistakes. Especially for those of us who are new to these conversations, there is a strong possibility that our early efforts and communication will fall short. Hopefully, the steps we take will be more beneficial than standing still and that we can listen, learn and keep growing.

“The goal of this call is not to provide a roadmap or framework or answers about how to handle these tough conversations, but rather to show that we’re all susceptible to making mistakes; that it’s possible to still take action and make a positive contribution while making those mistakes; and that it’s important that as the leaders of our organizations we recognize that we’re not going to make these positive steps forward that we want to take unless we’re willing to take those ourselves, personally and sincerely,” said Moore.

With many climbing brands and gyms showing support on social media, one of the underlying topics of the call concerned how to convert those statements into actions. Malik Martin, Resident Photographer & Social Media Coordinator at Memphis Rox, discussed some of the ways Memphis Rox is doing that right now. During COVID-19, the nonprofit climbing gym has been handing out free lunches, hygiene kits, hand sanitizer and more in  their surrounding neighborhood. Partnerships with local organizations and donations from members have helped make it possible.

“Right now, everybody is asking what can we do. If you make those connections, you’ll find that there are people who have resources that can be given out. Essentially, we’re not creating anything, we’re just funneling resources through us,” said Martin. “We wanted to make sure that the people in our community who tended to be hit hardest by COVID were the ones who were getting the most resources.”

Despite the positive work in their wider community, Memphis Rox still received pushback when communicating about the protests. Jon Hawk, Director of Operations at Memphis Rox, said they received negative feedback from people outside their community after posting a statement on Instagram―some from well-known personalities. Speaking out takes courage, and some pushback can be expected. Hawk approached these reactions with positivity during the call.

“But we’re not letting that discourage us, we’re just fighting harder now. All we’re saying is, ‘Well, we made it, we got their attention. Cool, let’s keep going,’” said Hawk. “I urge everybody to do the same thing. Speak the truth. Climbing’s about love and caring and mentorship and helping each other and overcoming obstacles. And this is an obstacle, so let’s just climb over it and do it.”

Nosotros climbing gym also received some negative feedback after posting on social media. Following the death of George Floyd, Nosotros launched a t-shirt campaign to raise funds for the George Floyd Memorial Fund. The t-shirts included an image of windows at the gym broken during the protests. The post on Instagram received dozens of comments, many positive but also some critical ones. Instead of ignoring the comments, Nosotros founder Peter Stancato approached it as a learning opportunity and addressed them head on in a follow-up post two days later. Nosotros launched a second round of t-shirts which more explicitly conveyed the intended meaning, saying, “Racism is a mountain we need to climb together. #blacklivesmatter”. The feedback this time has been overwhelmingly positive.

“For all of you who are listening, you may be in either 1 of 2 situations: either you said something online and you got backlash, or you haven’t said anything at all because maybe the backlash seemed scary…It’s so much more important to take a stance rather than not,” said Stancato. “It is dicey, it’s a sensitive climate. I think it’s helped just addressing the questions head on.”

Going forward, Stancato plans to involve the Nosotros climbing community in a bigger way. Stancato hopes to host a “Thinker’s Meeting” next Monday, where people can gather outside the gym and brainstorm ideas for what to pursue next. Later will be a “Doer’s Meeting,” to come up with next steps for how to achieve that idea. Every individual gym or brand has different resources, but coming together―and partnering with groups already doing this work for decades―can extend the impact.

“We already saw where this gets when it’s just my brainchild. I’m going to make mistakes by myself. It’s a community effort. We all know rock gyms are based on community. So hopefully we’re going to make a community decision on Monday,” said Stancato. “Because we want to put something into practice. We want to do something.”

The community call concluded with the participants answering questions from the listeners. To check out their answers to these questions and listen to the full recording, click here. 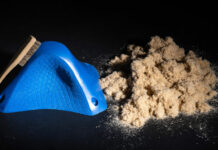