Climbing gyms can give visitors that nervous feeling in the pit of their stomach, and the sight of a modern day climbing gym’s wall can be adrenaline inducing. For some of us, this fear and excitement is quickly replaced by the respect for the architectural achievement of the very building we’re standing in. It’s easy to appreciate these modern marvels of space and capacity when you consider the amount of activity harbored within their confines. As the acknowledgment settles, a new thought emerges – how did these buildings become so big?

Enter Rooflifters, an American company who will literally raise the roof of a building. In the early nineties, Rooflifters started as a collection of general contractors who found a majority of their work within the industrial and retail construction sectors. Their business model, however, slowly changed as an emerging niche market gained traction. CEO Marty Shiff and his team found themselves with a new business model providing adequate ceiling height for a pioneering generation of entrepreneurs looking to build rock walls, trampoline parks and fitness gyms.

Over time, climbing gyms became a substantial revenue source for Shiff’s company. Originally, a ceiling height of just twenty-five to thirty feet was adequate to house the average climbing gym. As with any developing market, climbing gyms sought to be bigger and better than their competition. Today, the ideal height for a new project is often forty-five feet. Future gym owners also are looking at populated urban areas with a favorable demographic in their target market. Unfortunately, buildings in these desirable locations are ill-suited for climbing gyms due to their low ceiling height.

“For many gym owners, the ideal location for a climbing gym is within the city center,” said Shiff. “But the issue with these buildings is they were originally built for retail purposes with a ceiling height averaging just fourteen to sixteen feet.”

Climbing gym owners are then left with two options, construct a new building or “popping the top” on an existing structure.

The roof-raising process begins when a gym operator approaches Rooflifters with a specific building in mind for their proposed climbing gym. Usually, they will have found a great location that lacks the necessary ceiling space for a modern climbing wall. At this point, Shiff and his team develop a realistic assessment of the cost to modify the structure into a climbing gym. This can be done with as little as ten images and a short survey of the details and history of the structure.

Once Shiff and his team are officially hired to alter a building’s roof, Rooflifters’ equipment and personnel are brought to the individual job site. The roof of the existing structure is separated from the building and lifted on large hydraulic stilts. Once raised to the ideal height, the team reconstructs and reinforces the roof’s internal membrane. Walls are then added to house the newly created headspace. Finally, technical aspects including air conditioning, sprinklers and lighting are handled by sub-contracted workers who are also challenged to bring their services to new heights.

Gym owners go through the trouble of drastically modifying their desired buildings primarily to gain a competitive advantage. But there’s a financial advantage as well. In most cases, lifting the roof of an existing building can be one-third to half the price of building a completely new structure. Additionally, the speed to market of raising an existing roof is quicker than building a new structure. A newly built climbing gym can take up to a year and a half to complete while, according to Shiff, “The time span to raise the roof of an existing building takes an average of just six weeks.”

Typically, raising the roof of an existing structure is considered a renovation by the municipal Building Department. Climbing gym owners prefer this method because the existing structure has been grandfathered into the various safety codes it received when built. Permits are still required for renovations but come at a lower cost than building an entirely new structure.

While searching the Los Angeles market for a suitable building in which to create a new climbing gym, Jeffery Bowling, a senior manager of Touchstone Climbing, found that the number of forty to fifty-foot buildings was very limited. Bowling also understood the potentially high price tag of building a completely new structure. In order to house their new Cliffs of Id climbing facility, Bowling chose to raise the roof of a former warehouse in Culver City, CA. The new facility, which features 45-foot-high rope climbing walls — Touchstone’s highest in LA – opened in August of 2016.

Despite these clear advantages, raising the roof on an existing building is not always the best solution. While searching for a location for a New York facility, Brooklyn Boulders contacted Rooflifters for an estimate on a potential roof raise. A project within their namesake Brooklyn location called for an additional three thousand square feet. After an initial analysis, Shiff concluded it would make more sense for BKB to build an entirely new structure.

Another solution for dealing with short buildings is to simply build a taller section onto an existing building. Onsight Rock Gym in Knoxville, TN did just that last year with their new building.

The Power of Big

The market for lifting building roofs exists in many industries, from large wholesale companies, refrigeration, manufacturing, and schools. Businesses considering a roof raise, especially climbing gyms that rely on adequate clear height for their climbing walls, should seek companies who specialize in the craft. Completing a project of this magnitude is no easy task, which is evident in the many companies who provide the service around the nation.

Within the last decade, climbing gym’s have successfully opened in many markets across the nation. This is a testament to the power of the climbing industry and its ability to stay competitive among the many avenues of exercise for fitness fanatics. The challenge for Shiff and his team is to show climbing gym owners how they can be successful with an unorthodox approach to creating their visionary gym. Raising a building’s entire roof can save time and money on a business’s investment.

As the quality of the modern day climbing gyms evolve, it is imperative for the gym staff to operate a competitive and creative facility. Without a high enough roof, climbing facilities are mostly limited to bouldering-height walls and can render themselves undesirable to the large demographic of climbers who enjoy tying into a harness. Jeff Bowling described the trade-off best: “For many locations, the option is to either raise the roof or have a bouldering only gym.”

Connor Mills is an avid climber and a freelance writer from San Diego. This is his first article for CBJ. 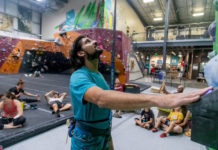 Are outdoor gym walls becoming more of a thing? Th