Back in June 2014, USA Climbing, the national governing body of competitive climbing in America, had their 3rd leadership change in six years.

Their new CEO, Kynan Waggoner, has been involved with the organization in one form or another since 2001. First as a national routesetter under the tutelage of Tony Yaniro, and then over the years, serving as US Team Coach and putting in time as a volunteer on almost all of USAC’s committees. He became a part-time employee in 2006 and quickly provided valuable assistance to the organization; by 2007 he was working full-time, and soon thereafter he was tapped to become the Director of Operations.

Waggoner has seen from the inside every leadership change at USAC, starting in 2008 when their first official CEO, Anne-Worley Moelter, left the organization to start the Movement Climbing gym in Boulder, CO. The USAC Board then hired and had great expectations for Keith Ferguson, a former pro-rodeo executive and US Olympic Committee employee. Ferguson left in 2012, and after an extended period with no CEO, the Board brought in Mary-Claire Brennan a former marketing executive at the USOC. She was in the corner office for less than a year.

Many in the industry have heralded Waggoner as the savior of USAC and are looking forward to where he will take the organization. Currently USAC is experiencing between 17% to 19% growth year-over-year in Regional Championship participation. That growth translates to more climbers and more members paying dues to the organization. According to Waggoner, this growth has been “because of the work that’s been done over the past ten years.” It’s fair to say each of the organization’s past CEOs have made a positive impact on competition climbing, but it’s also true that the organization has grown and succeeded in no small part due to Waggoner’s own steadfast work over the same period.

The Future According to Kynan

What will USAC look like going into 2015? For Waggoner, it starts at the foundation. “My goal is to improve the foundation of the organization by building infrastructure, not just in this office, but amongst the regional coordinators and host facilities,” he said. The goal of this foundational work is to ensure that USAC sanctioned competitions across the country have the same standards of excellence. “No matter where the participant is, if they’re in California or in New Jersey, I want them to get a similar experience in terms of the quality and professionalism of the event,” Waggoner emphasized.

One component of this standardization started years ago with the implementation of USAC’s routesetter certification program and the corresponding clinics and internships at national events. “We zeroed in on the routesetting piece as the foundation of what everything else [in an event] is built off of,” Waggoner said. “Now we’re at a point where other pieces need to be managed.”

There are many other areas of event management that Waggoner would like to see improved, but the area he intends to tackle first is judging. This is a particularly tricky aspect of the organization’s competition climbing program. Every sanctioned comp that happens in the US, from the local to the national level, uses volunteer judges, and not all judges are created equal. Waggoner wants to fix that and he’s starting with education. One aspect of this is to create teaching videos that address subjective aspects of the rule book, such as starting position of the climber and what “control” of a hold looks like. With these new tools he hopes to take out some of the inconsistency in judging found in comps today.

Another key component Waggoner wants to address is athlete coaching. Though USAC doesn’t have direct control over coaches, as they do with setters and judges, he believes there is a big opportunity for the organization to help expand the tools and training they have available. “Our coaches are not being given adequate opportunity to learn from people outside, not just outside of climbing, but outside of the United States,” observed Waggoner. “There is a whole other world out there of successful programs that can teach elite athlete performance. Right now we’re not in a place to try and develop those things ourselves, but we are in a place to try and listen and take notes.”

One way he’s hoping to bridge this gap is to bring in international coaches and setters for workshops aimed at helping US Team athletes. Waggoner’s team is working on a plan to host a US Adult Team Training Camp prior to the Vail World Cup, and he hopes this event can serve double-duty as a training opportunity for US coaches and setters.

Unlike just about every other CEO before him, Waggoner is not solely focused on sponsorship revenue. He understands that fundraising is important to the growth of the organization but told the Board before they hired him, “If you are looking for someone to drive increased sponsorship revenue, go hire someone else because I’m not a salesperson.”

This honest appraisal shows that, like all good leaders, he knows what he’s good at and what he’s not. To compensate he plans in the near future to contract with a person or firm that has the right sales experience and skills, and can devote themselves to expanding the organization’s revenue base.

One reason Waggoner is eager to boost the organization’s top line is that he may be the first CEO to understand the importance of building a truly competitive US Team that can perform on the world stage. Compared to other nations, the US has a long way to go, and to move toward this goal the US needs to invest a lot more money into athlete programs.

Many comp observers may think that once a climber has qualified for the US Team they are given all the resources they need to compete at World Cups and other international events. Sadly that is not the case.

Any team member that wishes to compete at a World Cup pays their own way, which includes the IFSC entry fee ($70-90) and an athlete license ($50). The athlete also pays their own travel costs, which can easily be as high as $3000 -$5000, and in some cases can climb into the $10,000’s. On top of this, athletes pay for their coaching, physical therapy and access to training facilities out of their own pocket.

Waggoner wants this to change. “We live in the United States and it’s a shame that we can’t do more for these athletes,” he said. Unlike other climbing federations around the world, in the United States elite competitors do not receive government funding and corporate sponsorship of athletes is still rare. But according to Waggoner, “We don’t have the money to [financially support the Team] and continue our current scope of events and programing.”

That’s why he and his staff have created USAC’s first fundraising campaign that specifically targets where the funds will go; for this first campaign all funds will go to supporting elite athletes.

This fundraising campaign is based around a $100-per-ticket raffle called The Golden Ticket. According to the USAC website proceeds raised from the Golden Ticket Fundraiser are earmarked to:

The US Team is not the only project that needs some investment. High on Waggoner’s list is the construction of a new website and database. The current USAClimbing.org website and underlying system is “still in the dark ages,” he bemoaned. “We’re still based on technology that I think is at least ten years old.”

A new internet presence is just the beginning. On the back end Waggoner envisions a new database system that will manage the thousands of members and track results from hundreds of events from around the country each year. This system would not only improve the registration experience for members, but would also significantly reduce the amount of time USAC staff spend entering, managing and sharing data from events. This means it’s critical they get the system design right before they focus on a much needed facelift for the website. “I want to see a nuts and bolts platform that meets all our needs, from membership purchases to event registration to results, before I focus on the look and feel of how it’s all displayed on the internet,” Waggoner said.

If this current fundraising initiative is successful the next round could happen as early as next spring, with funds earmarked for modernizing the website and building a robust and secure database. But it’s no small task. After releasing a website RFP early last year, Waggoner received quotes that ranged from $175,000 to $400,000.

Waggoner believes that technology and marketing are closely related. With the appropriate tools the organization can use online mediums to grow the sport. A key component of his strategy is to expose climbing competitions to people that that have never been able to see them before. “You’re not going to see ABS Nationals broadcast on CBS Sports,” he joked. “I don’t think that’s feasible, but what we can do is invest more and more in our live broadcasts across more events.”

Bringing comps into new and emerging markets like Madison, Wisconsin — where this years ABS National Championships will be held — is another aspect of this push.

Waggoner is not afraid to point out areas that need improvement. “We need to do a better job of providing promotional material for every aspect of the programing we do and to tailor that to every potential demographic that we work with,” he said. One example he gave is making sure that current youth competitors know about and are excited about the opportunities at the collegiate level. “The CCS is just one specific program but we have to hit two different demographics,” he explained. To expand this idea they need to rework how USAC markets the entire suite of events they manage: youth and open; lead, speed, bouldering; and now paraclimbing.

After more than a decade with USA Climbing, what keeps Waggoner going? “I still really like competition climbing. I still really like climbing,” he said. “And I do think we make an impact on people, especially when I consider the impact on kids.” He believes this includes everyone that competes, from the pro athletes that make it to the world stage, all the way down to the kid that takes last place at a local event. “They’re participating in climbing competitions because comps are fun, regardless of whether they take first or last,” he said. “At the risk of sounding cliche, I believe there are so many life lessons gained through climbing.”

One might call his approach to leadership pragmatic passion: a blend of hard-earned perspective gained from managing hundreds and hundreds of comps with a true love for the sport. With this kind of leadership Waggoner just might be able to take USA Climbing into a new realm of possibilities. 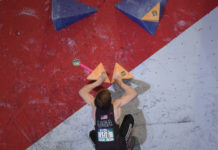 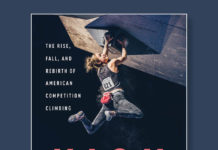 Routesetting Should Be Fun—It’s Not Brain Surgery: Behind the Wrench with Alison Krayer