Superstar climber Kevin Jorgeson, whose 19-day ascent of Yosemite’s Dawn Wall captivated the world in 2015, is undertaking his next climbing challenge right in his hometown of Santa Rosa — building a state-of-the art climbing gym from the ground up.

Jorgeson and his business partner, Mike Shaffer, have joined forces with a prominent developer to build a new multi-million-dollar facility called Session Climbing on what is now a vacant lot beside Highway 101.

“We need something new to hold the next generation of climbers here in Sonoma County,” Jorgeson told the Press Democrat.

There hasn’t been a new climbing facility in Sonoma County since Vertex Climbing Center opened in Santa Rosa (pop 175,000) in 1995, and the climbing community has been clamoring for a next-generation gym for years. Another pro-climber, Carlo Traversi had hopes of opening one of his two new gyms in Sonoma County but pulled out early this year. His Sacramento project is on pace to open later this spring.

Jorgeson and Shaffer, who said their efforts to partner with Cooley didn’t pan out, said they’re moving forward on Session Climbing to deliver the climbing gym the community deserves. They’ve lined up investors, convinced Brad Baker, the former head of Codding Enterprises, to buy the land and develop the site, and have begun the permit approval process at the city.

The pair convinced Baker to buy the land, which cost about $1 million, lease it back to them, develop the site and build the building. The structure, which features an alpine-themed exterior, has been designed by Santa Rosa-based Archilogix and will cost about $6 million, Baker said. 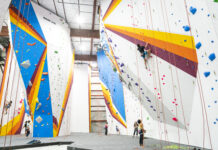