After 6 months of design work and another 6 months of construction by Walltopia, he can now add climbing wall designer to his resume. With his first foray into wall design at the new Earth Treks climbing center in Golden, Colorado, Kehl is hoping to push the boundaries of what a climbing wall can look like. “We have just scratched the surface. I don’t think there is a limit. The only limit I see is functionality, you could have a really interesting design, but if it doesn’t climb well it defeats the purpose,” said Kehl in an interview with CBJ.

The philosophy of form-meets-function is epitomized in the design of products that must be functional, but may also be beautiful so that the user finds satisfaction or joy in using the product. This is never more apparent than with climbing wall design. Historically climbing walls have been designed more for function than for form, but with this project Kehl wanted to take head on the task of blending these aspects.

His first decision was not to look at outdoor crags for inspiration, but to look towards art, especially architecture and sculpture. In his recent Dead Point blog, Kehl writes, “Some preliminary image inspiration included cathedrals, long bending metal sculptures, spiraling staircases and archways where it is just as important what you see through the arch throughout different points in the gym. I thought that it was important that this gym was not only functional but visually stunning and purposeful.”

Kehl believes that climbing gyms should not mimic outdoor crags but should be something completely different. “Why recreate rock when you can experiment and have fun with a whole new apparatus,” Kehl said. “Standardization bores me, I wish holds had many textures and materials. I feel the same way about climbing walls, I think they should be abstract as possible, but still follow the simple laws of nature.”

Kehl and Chris Warner, President of Earth Treks, bucked another typical starting point for wall design: other climbing gyms. In fact Kehl believes that most gyms do a poor job of making a cohesive, fluid design, and he wanted to avoid this. “The walls all need to work together visually, like in nature everything is connected,” said Kehl.

One gym that did attract notice was the Climbmax in Stuttgart Germany. The German-based gym developer had recently opened their Stuttgart facility and the Earth Treks team saw a few things that they liked. Kehl said, “I saw some pics on Facebook and liked how there were lots of different terrain and stand out features.”

When looking at the Climbmax gym it’s easy to see a few of the similarities in the new ET – Golden facility.

Perhaps the most important aspect of Kehl’s design philosophy is maintaining a sense of flow and balance. “If you change one thing, everything connected must also change, one wall becomes steeper, the opposing wall leans with it,” he said.

Kehl makes a distinction between outside climbing, which he finds un-inspiring for design, and natural shapes and forms. When asked about his recurring theme of the pentagon Kehl said, “It is … in nature, in flowers, spider webs and the star, and the 5 sides allow for more tapered angles unlike the 4 sided box. We tried to stay away from having anything too closed or too sharp. Having them recur is just a way to keep everything connected.”

Kehl and the Earth Treks team also understand that the foundation of any climbing gym are new climbers. They appealed to these climbers by designing two separate teaching areas away from the prying eyes of more experienced climbers. This gives the new climber a safe and comfortable place to learn belay and movement technique.

These walls are not just the typical flat panel climbing wall with some old dusty holds on it. “I feel gyms neglect making the easier terrain interesting and just throw up a vertical wall,” said Kehl. Understanding that even beginners want more than just a boring flat wall, he designed corners, aretes, slabs and even overhangs into the learning area.

In the recent video interview with ClimbingNarc Kehl spoke about the balancing act of creating wide open space with 3-D architectural features. “When I’m outside I like to climb on features, be it an arete or a big roof,” Kehl said. “I was trying to do a lot of different features in the gym so it felt like you were on the edge of something. It wasn’t like ‘oh I’m on a flat wall and this is where I am’. You have this more 3-dimensional feeling to it.”

This culminated in such features as the Death Star and as Kehl describes them on his DPM blog, “The Blade, The Wave and Ships prow in the back are all 3-D stand out features and are massive in size. With The Blade I really wanted to give the climber the feeling there on the edge of a massive boulder. The Coffin Prow is too big to span across and creates 3 separate aretes on this one feature.”

Moving away from expansive flat walls was a theme he took to the rest of the gym. “We were really focused as a group on having individual lines. So we have certain terrain here but then 10 or 20 feet down the wall it’s a lot different so you’re not just climbing the same stuff all the time,” he said.

Now that the gym is open and seems to be a huge success, what is Jason Kehl’s advice to future wall designers? “Work with the space, there should be give and take so everything can work together instead of feeling like an obstruction.”

We may be seeing more walls designed by Kehl in the future. “I love to create and I love climbing, from the tiniest foothold to a gigantic wall, there is still so much to do with design in the climbing industry,” said Kehl. 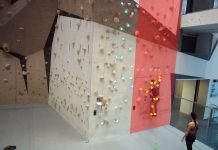 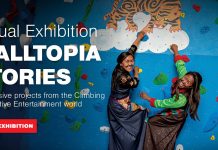 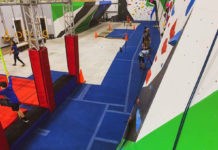 Open Doors: Fall Round Up