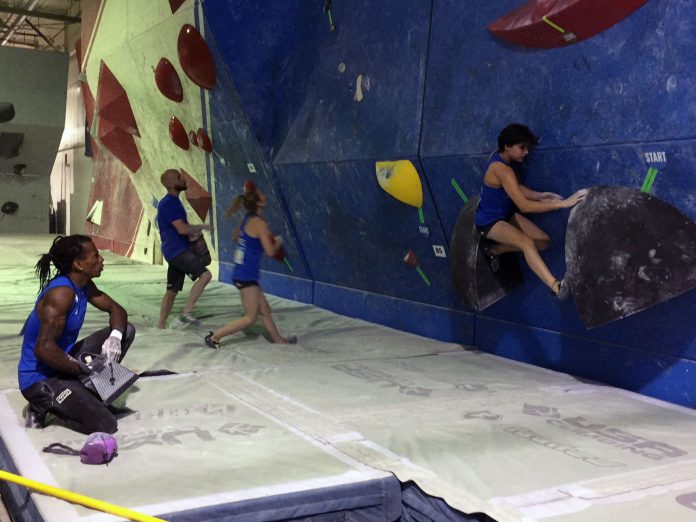 In addition to the mixing of men and women on the participatory teams, the competition was unique in that only designated national coaches were allowed to observe the boulders prior to the climbing; those coaches then selected which two athletes from their given national quartet would attempt to climb the boulders.

Of the nations that took part, France proved unstoppable. In fact, one of the highlights of the event was the four-person French team (comprised of the aforementioned Bertone, Mickael Mawem, Nicolas Januel, and Mailys Piazzalunga) cruising to the top of the first two boulders with more than a minute of the five-minute allotment remaining on the clock. The French team finished the Mixed Team competition in first place, followed by a quartet team from Belgium in second place, and a quartet team from Japan in third. (Fanny Gibert, normally a stalwart French competitor, took part but competed as a member of Belgium’s team in good sportsmanship to make the roster numbers the same.)

At a modest podium ceremony outside the Training Center following the competition, the French Team sang “La Marseillaise”—their country’s national anthem—as a crowd of other competitors, coaches, officials, and media looked on and applauded.

Always something to watch

The concept of Mixed Team climbing is certainly not new to the industry, and a number of gyms around the world have hosted variations of it—or offered multi-week bouldering leagues that entail men and women teaming up. But nothing of this specific format had ever before been organized and unveiled by the IFSC, featuring World Cup climbers participating in the midst of a World Cup season—and with formal accoutrements such as judges, an isolation zone, and prizes.

The IFSC’s Mixed Team Event first originated as an idea in 2020 and a task force of officials, athlete representatives and national federation members was soon put together to analyze its feasibility. An initial thought was to roll out the event at a World Games, possibly utilizing all disciplines—bouldering, lead, and speed climbing. But, for several reasons, bouldering seemed like the best option while the event is still in somewhat of an exploratory phase.

“By the nature of bouldering, sometimes the athletes are resting, reading the boulder, and waiting before approaching the problem,” says Alessandro Di Cato, the IFSC’s Event Officer and a driving force in making the Mixed Team event happen in Salt Lake City. (Di Cato was also a key organizer behind the IFSC’s innovative Remote Speed Knockout during the COVID-19 pandemic, as previously reported on by CBJ. ) “With a team competition, this element of always having action on the field of play—I think it is really important, and also from a spectator’s point of view there’s always something to watch. And during the rest time, there is an exchange of information between members of the team.”

Plans for the future

Di Cato was happy with how the inaugural Mixed Team event in Salt Lake City turned out—and coaches and athletes told him afterwards that the competition was greatly enjoyable. Still, Di Cato acknowledges that tweaks might be made as the format is evaluated and additional Mixed Team events are considered by the IFSC for the future: “We need a bit of time to collect feedback, to understand when would be the right occasion to propose it [again], and then how…and in how many years?”

Di Cato stresses how much the first-ever event successfully applied a team concept (and active coaching) to an IFSC competition climbing context. “I think not only me—it’s not important how I feel—but everybody was super happy and many people said it was great,” he notes.

It is possible that this unique IFSC event will inspire climbing gyms to host similarly formatted Mixed Team competitions for members. To this, Di Cato says, “We would be very happy if people around the world would like to set small competitions like this.”

The IFSC’s Mixed Team event aligns competition climbing at the elite level with the same concept in other sports—Mixed Doubles in tennis being one of the most prominent examples. “Of course we have our three disciplines—and we believe in them,” Di Cato says. “But this could be something extra, something fun, something that gyms could organize around the world.”

The full results of the competition can be found on the IFSC website, and watch the video below to hear some of the athletes’ perspective on the unique concept.

Sender One to Host a Paraclimbing World Cup Later This Year