High Point Climbing and Fitness in Chattanooga, Tennessee celebrated their official grand opening on March 21st by hitting the milestone of 650 members. Since opening the facility last December, High Point has exceeded the owners’ growth projections, and according to owner and partner Johnny O’Brien, they are already breaking even.

The facility is part of a redevelopment project called The Block in downtown Chattanooga that includes the climbing gym, a coffee shop and an outdoor retailer called Rock/Creek.

High Point’s owners, O’Brien and partner John Wiygul, are new to the climbing gym industry, but that hasn’t stopped them from thinking big and being successful. O’Brien gained his business acumen while at the helm of a $1 billion company that specialized in nursing homes and assisted living centers. After 35 years in the healthcare industry he turned his attention to climbing gyms after his triathlon coach (and future business partner) took him to a climbing gym for some strength training. After just a few sessions O’Brien was hooked and they came up with a business plan for High Point.

“I love climbing indoors! Even if I never went outside to climb, just to be inside bouldering or top-roping and being healthy and fit while you do it … I just see climbing gyms as the superior product for the fitness minded.”

O’Brien’s investment in High Point came in the form of $4 million of his own cash for lease holding improvements and additional SBA loans for a total of $6.5 million in capitalization for the project. For someone with no experience in the climbing industry this may seem like a rash move to make. For O’Brien it came down to matching the size of investment capital to the potential market and trusting his instincts.

“I didn’t really know, without the industry being mature, how the investment would perform or how the asset would perform other than a gut feeling that this is a great industry and something exciting that I wanted to be a part of,” said O’Brien.

He’s now putting an additional $500,000 into the project to build a 3,000 square foot expansion that will house a dedicated kids area with a Walltopia Funtopia and a smaller bouldering area.

In the hour-long phone conversation CBJ had with O’Brien he mentioned “opportunity” no less than a dozen times. And according to O’Brien there are a lot of opportunities in the climbing industry.

“I would rather be part of an industry that is growing, expanding and doing things better. There is a lot of opportunity in a lot of different markets to build high quality gyms,” said O’Brien.

But starting a climbing gym is nothing like starting a nursing home, and in some ways it is much harder. In the healthcare industry banks immediately understand the concept and industry numbers are readily available. “There is a broad financing market in place. There are parameters you can obtain based on a pro forma,” O’Brien said of the healthcare industry. “In the [climbing gym] business there doesn’t seem that there is a financing market for the industry. What I’ve found is you’re going to have to rely on your personal banking relationships and convince them that it’s a good business model.”

The other major difference O’Brien saw was the lack of an exit strategy. This term doesn’t show up much when talking with gym developers but in the healthcare business it’s a common approach to business planning. “There are a lot of regional companies, a lot of national companies so there is an exit strategy in place. If you build something and it’s profitable there is an immediate exit so you can sell,” said O’Brien.

While the climbing gym industry is still in its infancy in that regard, O’Brien thinks that the market will get there eventually. “Although there’s no exit and no real market of buying and selling of facilities, I feel like it’s coming, that in 10 years it will be there,” said O’Brien. With that in mind he feels like now is a good opportunity for companies to start building a network of climbing gyms.

While O’Brien says he doesn’t want to jump on to the gym-rush-band-wagon, he does have bold plans to step out of Chattanooga and into the great southeast. “I imagine that we’ll do, maybe, one project every 12 to 18 months,” O’Brien said. “I could see us building 10 facilities in the next 10 to 12 years.”

If everything goes as planned for O’Brien and Wiygul, the first stop on High Point’s expansion could be Memphis, Tennessee which currently has no commercial climbing facilities. In fact, O’Brien and Wiygul were looking at Memphis before the City of Chattanooga approached them with the idea of a climbing gym in downtown.

Other major cities on O’Brien’s wish list: Tampa and Orlando and even Miami are good candidates for possible High Point locations.

“Really there are so many markets out there that are in need of a really high quality gym. To be honest, I’m surprised at how many large cities don’t have a high quality gym. It’s almost every major city I travel to,” said O’Brien.

For O’Brien “high quality” is synonymous with gyms like the new Earth Treks, Sender One and Stone Summit. He sees these large, multi-million dollar companies changing the way climbing is sold in America. With large work-out areas, yoga studios, professional classes and full service climbing, these facilities are delivering better overall value for the fitness-minded consumer.

“Build a nice product and put it in a great location with great staff that are helpful and not intimidating, and you can show customers it’s a great way to get fit,” O’Brien said.

By building a great product with broad appeal, O’Brien believes climbing gyms don’t need to focus on markets that already have a strong community of climbers.

“Now I’m new to the industry, but if I look at it it seems to me that clustering around climbing communities compliments the gym but … there’s an opportunity in every market, not just where you have outdoor rock climbing. There are a lot of members of climbing gyms that never go outside, or they make a special trip once a year as part of a vacation to climb outdoors,” O’Brien said. “If you want to just go after the climbing community, that’s a narrow focus. I’m looking at it like the whole climbing industry can expand.”

Stepping into these un-traditional markets opens up a huge untapped market of people that have never climbed before. For O’Brien that is another exciting opportunity. “I hope we grow and expand the number of climbers all over the country. I hope climbing becomes a much bigger sport with a lot more good quality comps held everywhere. I think its a cool market and good business to be in.”

O’Brien is new to the climbing industry, but that might be a good thing. In fact, being a neophyte has its advantages. “I don’t really see barriers because I haven’t been a part of it long enough,”  O’Brien said. “I just see a lot of opportunity.” 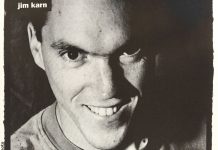 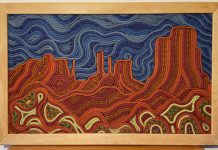 Old Ropes, New Art: Behind the Desk with Elliot Lacroix 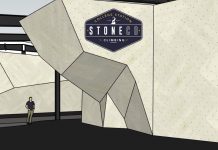 Well-Known College Town to Get a New Gym

This backyard homewall may look simple, but owner

Remember when “fun” was in our vocabulary? Aft

A recent rope-art piece, depicting a scene from th