Specs: The new gym, planned as a 30,000-square-foot facility (with a maximum wall height of 55 feet), will feature bouldering and roped climbing, along with yoga, spin cycles and a full fitness center. Particularly noteworthy will be a 15-meter speed wall built to IFSC standards in the gym. Additionally, a training area will include a MoonBoard, a Tension Board, a campus board, and a station with a variety of hangboards.

“We also wanted to make sure there was plenty of room to relax and congregate,” notes Alta’s co-founder Pam Owens, citing a meeting room in the gym, as well as a pro shop, a party room, an outdoor party deck (facing west) and an outdoor “party patio” (facing east). Programming at Alta Climbing will range from summer camps and competition teams to climbing leagues, private lessons, and corporate team-building events.

In Their Words: “Rock climbing has long been a family affair for the Eaves Family, who started rock climbing at Rock Canyon in Provo, Utah, more than 30 years ago. The ten Eaves children were raised by their parents, Ron and Pat Eaves, to stand tall and climb high…in life and up mountains. Their father brought in an extremely large boulder for the kids to climb on and swing and jump from at their childhood home in Show Low, Arizona, and so their climbing began. A number of years after the family moved to Utah, their father passed away leaving Pat with ten children ranging in age from 4-16, and there wasn’t a lot of money left over each month for entertainment. Fortunately, climbing is cheap (once you have the gear) and they lived just a stone’s throw away from some of the best outdoor rock climbing in the area known as Rock Canyon. Climbing quickly became, and still is, a passion for the Eaves family. Eric, Pam, Deborah, and Paul are four of the ten children and have combined forces to build Alta Climbing.”
—Pam Owens, co-founder 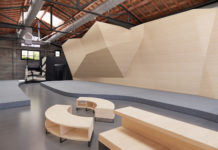 Well-Known College Town to Get a New Gym