Even though the best things in life are usually free, the holiday practice of gift giving is still a way to extend gratitude to the people around us. Friends and family, colleagues and staff, and so many others have been supporting us during this period. If you can afford to, give a meaningful gift to your staff or homewallers in your life. Or donate to one of these climbing nonprofits this season, it keeps their work going, and works on us too.

8-Year-Old Melia Launches Project 1st Ascent To Increase Climbing Awareness and Build Walls (Gym Climber)
“The inspiration behind it was getting kids the opportunity to climb. Not many kids even know about climbing, let alone know where to start.” – Melia

Video: DISTURBAN – Urban Bouldering Montreal (Jackalope)
“Fifteen years ago, some urban boulder lines were opened by Antoine and his crew, but many were never sent. 15 years later, Antoine reunites a team of determined climbers to conquer these daring lines.” – Jackalope

Video: Challenge – Who can set the hardest boulder? (Magnus Midtbø)

The Olympic Qualification Question: What is Fair? (Noah Walker, Gripped)
“The IFSC believed themselves to be defending the athletes that had already qualified, while the JMSCA appeared to believe themselves well within their rights to choose among their qualified athletes, those that should represent Japan.” – Noah Walker

Japanese Athletes Confirmed for Olympics Following Dismissal of Appeals (Kevin Corrigan, Climbing Mag)
“The resolution of this procedure closes a painful chapter, one that, for the first time in history, saw the National Federation of the country hosting the Olympic Games appeal against the qualification of two of its own athletes.” – IFSC

8 Holiday Gifts for Homewall Owners (Zoe Leibovitch)
“…It hasn’t been the easiest year for many of us. If you have the means though, brighten up the year’s end with some thoughtful holiday gifts.” – Zoe Leibovitch

New Washington Gym Plans for Winter Opening
“I was living in Seattle at the time, climbing at gyms there, and meeting my friend Rich Julian in Leavenworth to climb outdoors. He was frustrated that he didn’t have anywhere to climb and train in the Tri-Cities, where he lives. I’m from there originally as well, and it was never an option for us growing up since there was no climbing gym. So we began discussing the idea, and it slowly began to take shape.” – Pat Howard

MyClimb Partners with Pro Climbers for New Workouts Feature
“Our mission for the workout feature is to keep climbers connected to their climbing and fitness, during this unprecedented year of lockdowns and restrictions on gym occupancy. We hope these workouts will enable climbers to quickly return to climbing stronger than they were before!” – Bill Brooks 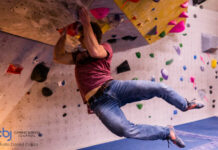 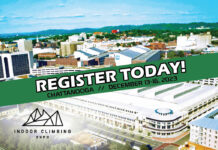 Climb Insider: ICE registration is live and more for managers

Climb Insider: reports from Meiringen and the first gym union